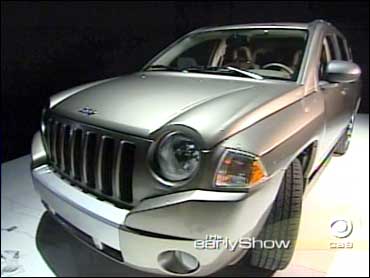 Automakers are keeping a special group of drivers in mind this year as they unveil their newest models at the North American International Auto Show in the Motor City.

As usual, Detroit is flexing its muscles, rolling out its pony cars, stampeding its horsepower.

But, reports Anthony Mason, those cars are marketed to men.

What do women want in an automobile?

Teresa Aguirre is a 30-year-old therapist and mother. She says, "For me, personally, it's safety. Safety is number one."

Overall, says Mason, that's most women's top concern. But women also like other characteristics in their vehicles.

But she doesn't mean horsepower. She means power lift gates or, as she puts it, "things that you just touch and something happens."

Performance and the handling of a vehicle ranked just as high in importance with women as it did with men, Mason notes.

He points out that some cars just scream '"chick car," of course, cars such as the Volkswagen Beetle.

But it's not a label most automakers like, because there's an old adage in the auto industry that you can sell a man's car to a woman, but you can't sell a woman's car to a man.

"And let's face it," says Jean Jennings, editor of Automobile magazine, "car companies are run by old white guys. And there are not a lot of women up there at the top. So they go to extraordinary measures to try to figure out the 'alien species' who, by the way, make most of the purchase decisions."

Chrysler Director of Interactive Marketing Bonita Stewart says the company's online marketing team has created an imaginary customer they're aiming at and "for the Jeep Compass, the name of the person is Jenny."

Jenny is a 26-year-old pharmaceutical salesperson.

They've even created a room for her "so, when you walk into this room, you see and feel Jenny immediately," Stewart says.

That way, Chrysler's marketers can better understand who Jenny is.

"These people become real to you?" Mason asked.

"They do," Stewart responded. "Actually, we become a little bit attached. We start asking, 'What would jenny do?' "

And, says Mason, as Detroit struggles to bounce back from a sales slump and market share erosion to overseas manufacturers, more and more automakers are asking what Jenny wants and what will Jenny buy.