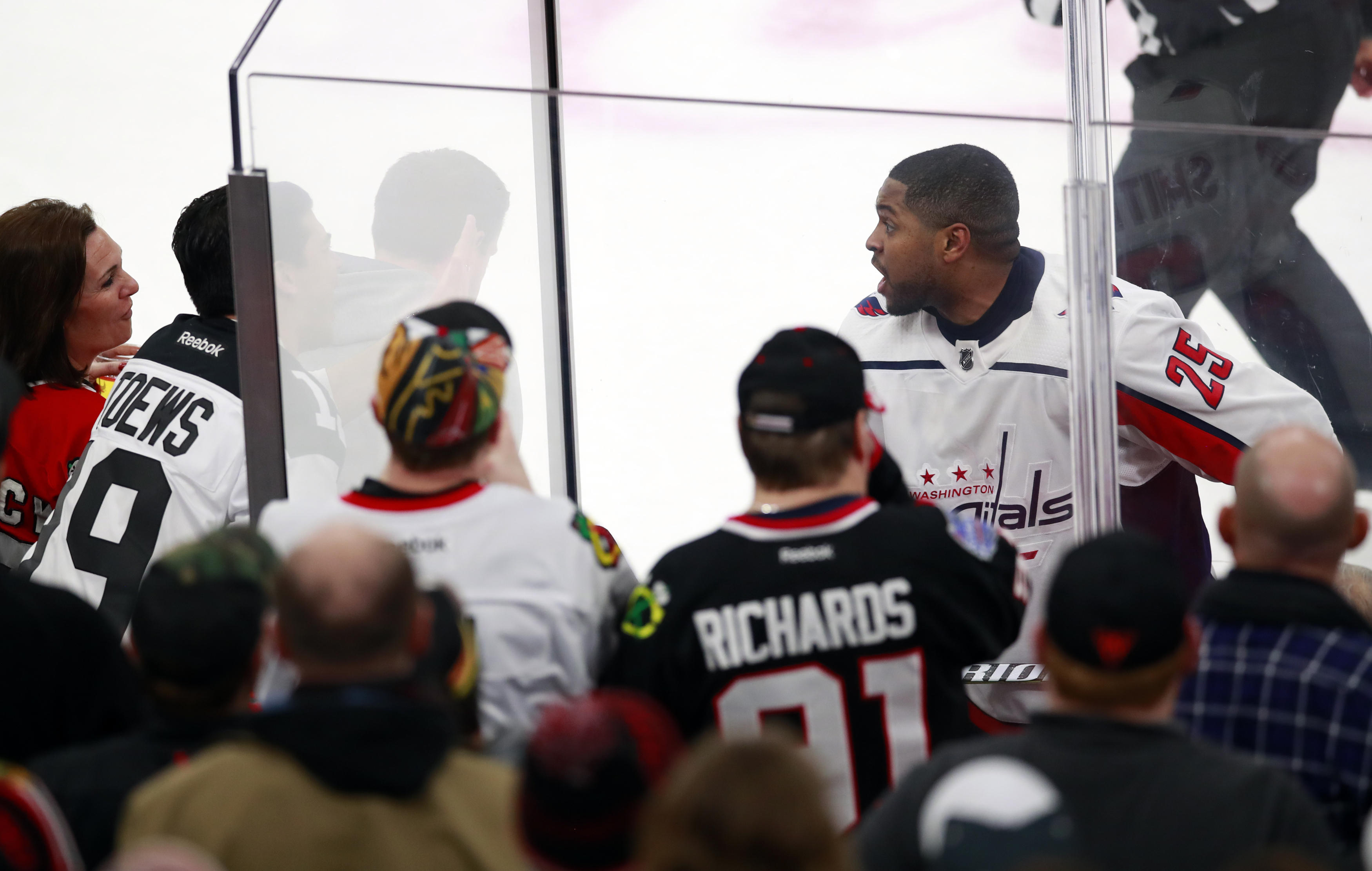 BUFFALO, N.Y. -- Washington Capitals forward Devante Smith-Pelly is disgusted and saddened black athletes such as himself continue to be the targets of racial taunts from fans. "It's sad that in 2018 we're still talking about the same thing over and over," Smith-Pelly said Sunday, a day after he was singled out by four fans in Chicago.

The comments were Smith-Pelly's first a day after four fans were ejected from Chicago's United Center for chanting a racial taunt while he served a penalty for fighting during the Capitals' 7-1 loss to the Blackhawks. An off-ice official sitting next to Smith-Pelly notified building security, and the fans were ejected.

He said he stepped forward publicly to call out the fans for what they said because he didn't want to "brush it under the rug."

"I guess I'm trying to get the conversation started and show whoever these people were their true colors," said Smith-Pelly following practice in Buffalo, where the Capitals will play the Sabres on Monday.

NHL Commissioner Gary Bettman released a statement saying the league condemns the fans' behavior and backs the Blackhawks for ejecting the offenders.

Bettman says no one "should ever have to endure such abuse at one of our games."

Video shows Smith-Pelly seated in looking and pointing to his left. He then gets up with his stick and gets into an exchange through the glass with a male fan seated immediately next to the penalty box.

Bettman said the NHL plans to remind all stakeholders "they are entitled to enjoy a positive environment, free from unacceptable, inappropriate, disruptive, inconsiderate or unruly behaviors or actions and may not engage in conduct deemed detrimental to that experience."

The Blackhawks issued a statement apologizing to Smith-Pelly and the Capitals following the game, and said they "are committed to providing an inclusive environment."

On Sunday, the Capitals released a statement saying they are "extremely disappointed by the intolerant behavior" by a select group of fans in Chicago.

In thanking the Blackhawks and arena security for removing the fans, the Capitals said: "It is crucial to confront such appalling conduct."

After the game on Saturday, Coach Barry Trotz said the player was "a little upset."

"There's absolutely no place in the game of hockey or our country for racism. And I think it's disgusting," Trotz said. "It just shows ignorance."

The 25-year-old Smith-Pelly is in his first season with the Capitals. He also has played for Anaheim, Montreal and New Jersey.

The fans' taunts occurred during the NHL's monthlong "Hockey is for Everyone" campaign to promote the game as being inclusive for all players regardless of race, color, religion, national origin or gender. February is also Black History Month in the United States.

The NHL has had to previously deal with racial insults.

During the 2014 playoffs, the Boston Bruins denounced fans who posted racial comments on social media targeting then-Montreal Canadiens defenseman P.K. Subban, who is black, after he scored in double overtime.

In 2011, a fan was fined $200 after pleading guilty to engaging in a prohibited activity for throwing a banana on the ice at Philadelphia Flyers forward Wayne Simmonds, who is black, during an exhibition game at London, Ontario.

CBSSports.com noted the incident comes during the NHL's "Hockey Is For Everyone" month, which aims to drive social change and promote diversity and inclusiveness in the game of hockey.