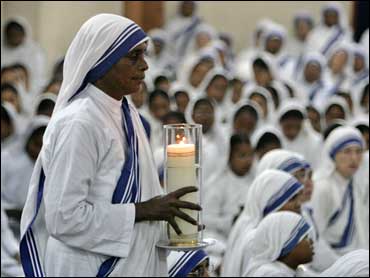 Devotees held Roman Catholic Masses, candle processions and interfaith prayers Wednesday to mark the 10th anniversary of the death of Mother Teresa, the Nobel Peace Prize winner who dedicated her life to serving the poorest of the poor in this eastern Indian city.

Calcutta's Archbishop Lucas Sirkar led an early morning Mass attended by nuns and volunteers at Mother House, the headquarters of the Missionaries of Charity order she founded in 1950.

Carrying strings of rosary beads, hundreds of her supporters followed the prayers with candlelight processions at clinics and schools that Mother Teresa opened in Calcutta's slums and ramshackle, impoverished neighborhoods during her nearly seven decades in India.

They offered flowers at her tomb and later participated in an interfaith prayer session organized by Calcutta's All India Minorities Forum.

"It is 10 years since our beloved mother left for heavenly abode, and she is continuing her work from there as well," said her successor, Sister Nirmala. "We pray so that we, too, are able to work for people as mother did."

At the Vatican, Pope Benedict XVI marked the anniversary, calling Mother Teresa a "real disciple of Christ" and urging her fellow missionaries to continue her work among the world's poor.

"Dear friends, the life and witness of this real disciple of Christ ... are an invitation to you and the whole church to always faithfully serve God in the poor and the needy," Benedict said as he greeted about 1,500 Missionaries of Charity gathered in St. Peter's Square for his general audience.

Mother Teresa, whose supporters hope to see made a saint, came to Calcutta in 1929 as Sister Teresa after she said she heard a call from God to serve "the poorest of the poor." She set up schools for street children and medical clinics for slum-dwellers in this overwhelmingly Hindu country where Christians account for a mere 2.4 percent of 1.1 billion people.

When she died on Sept. 5, 1997, at 87, her Missionaries of Charity had nearly 4,000 nuns and ran roughly 600 orphanages, soup kitchens, homeless shelters and clinics around the world.

Marisa Zorrilla, a volunteer nurse from Spain, said she was happy to participate in Wednesday's ceremonies.

"We are Catholics and have heard so much about Mother Teresa. And I got influenced by her ideals. So when I got the chance to visit India I thought I also should do my bit for people," said Zorrilla, 42, who is caring for the sick at "Nirmal Hridaya," or "Pure Heart," the first of many clinics Mother Teresa opened in Calcutta.

Mother Teresa was not beloved by all. She was criticized for taking donations from Haitian dictator Jean Claude Duvalier and disgraced American financier Charles Keating. Detractors opposed her stance against birth-control use in Calcutta's slums.

More recently, a new collection of her writings reveals that she at times doubted her faith.

"Come Be My Light: The Private Writings of the 'Saint of Calcutta,"' which was released Tuesday, recounts Mother Teresa's anguish over the crisis of faith, and the pain she felt over her separation from God. Some writings indicate that, at times, she may have doubted the existence of God.

But inside her community, there has been no public sign of disappointment over Mother Teresa's spiritual struggles. And although after her death, there were concerns that the Missionaries of Charity would flounder, the past decade has seen it expand into new countries and open new clinics.

There are now more than 4,800 sisters and more than 750 homes around the world, according to the order.

The group has "continued to function in the same spirit and work with the same sincerity among the poor and unprivileged," said Dr. Ruma Chatterjee of the Society for the Visually Handicapped, a nonprofit group that works with Mother Teresa's organization.

Sister Nirmala, a Hindu-born Indian convert to Roman Catholicism who now oversees the order hasn't become a household name like Mother Teresa, but she never expected to be.

"My way of coping with the challenge is simple - just to be myself," she said earlier this week. "I didn't fill Mother's shoes, that is impossible. I followed the footsteps left by the Mother."

Mother Teresa was beatified in 2003 after the Vatican said an Indian woman's prayers to the nun rid her of an incurable tumor, and millions of Catholics have called for her to be elevated to sainthood, a process fast-tracked by the late Pope John Paul II. Under Catholic tradition, an additional miracle attributable to her must be verified for her to become a saint.

While those who worked with her feel confident she will achieve sainthood, they're not worried about when she will be recognized.

"In the heart of people," said Sister Nirmala, "Mother is always a saint."