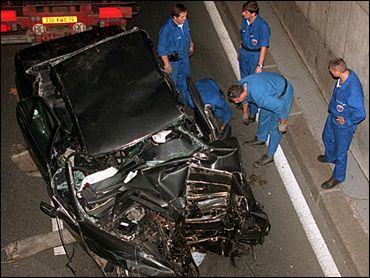 Photographers on trial for invasion of privacy testified Friday they were only doing their jobs when they snapped pictures of Princess Diana and her boyfriend, Dodi Fayed, on the day they died.

At the one-day trial, a prosecutor argued that the three defendants violated journalistic ethics and deserved suspended prison sentences for taking photographs before and after the couple's fatal Aug. 31, 1997 crash in Paris.

"What they wanted to photograph was misery, distress, people covered with blood," prosecutor Beatrice Vautherin said, asking the three-judge panel to set clearer limits on the boundaries of photojournalism.

Jacques Langevin, with Sygma/Corbis at the time of the crash, Christian Martinez of the Angeli agency, and free-lancer Fabrice Chassery risk one year in prison and 45,000 euros ($53,000 $U.S.) fines. Langevin now works for Deadline Photo Press.

Chassery, now with KCS Presse, described how he rushed to the crash site on a tip from a fellow photographer. He argued he was not in a position to help the injured couple, so he started shooting photos.

"The rescue services were already there, so I decided to take pictures," he said. "After 16 pictures, I decided to stop. The shock hit me."

The three men on trial were among a swarm of celebrity photographers who either pursued the car carrying Diana and Dodi Fayed or took photos after it crashed in a Paris tunnel.

A years-long investigation concluded that their chauffeur, Henri Paul, had been drinking and was speeding. He also died.

France's highest court dropped manslaughter charges against nine photographers — including the three on trial Friday — in 2002.

But Dodi Fayed's father, Egyptian-born billionaire Mohammed Al Fayed, filed a separate case against the three for invading his son's privacy. Diana's relatives and the British royal family are not plaintiffs in the case.

The photos were confiscated and never published. But under French law, the interior of a car is considered a private space, and they took photos of Dodi Fayed inside.

"An intrusion is when you go inside somewhere," he said.

Langevin, a photojournalist who has covered wars and terrorist attacks, said he has never run into trouble in the past when he took photos of people in their cars.

"We have never been prosecuted for this," he said. Martinez was not present in court.

A verdict is expected to be set for a later date.

Charges were dropped against five other photographers present at the crash scene.

The hearing came as a British paper, The Daily Mirror, is publishing excerpts from "A Royal Duty," an upcoming memoir by Diana's former butler and confidant Paul Burrell.

The daily also published a letter, allegedly written by Diana 10 months before her death, saying someone was planning a car accident "in order to make the path clear for (Prince) Charles to marry."

After the letter was published, Mohammed Al Fayed urged a public inquiry, but that was rejected by the British government. A coroner's inquest will be held once legal processes in France are completed.