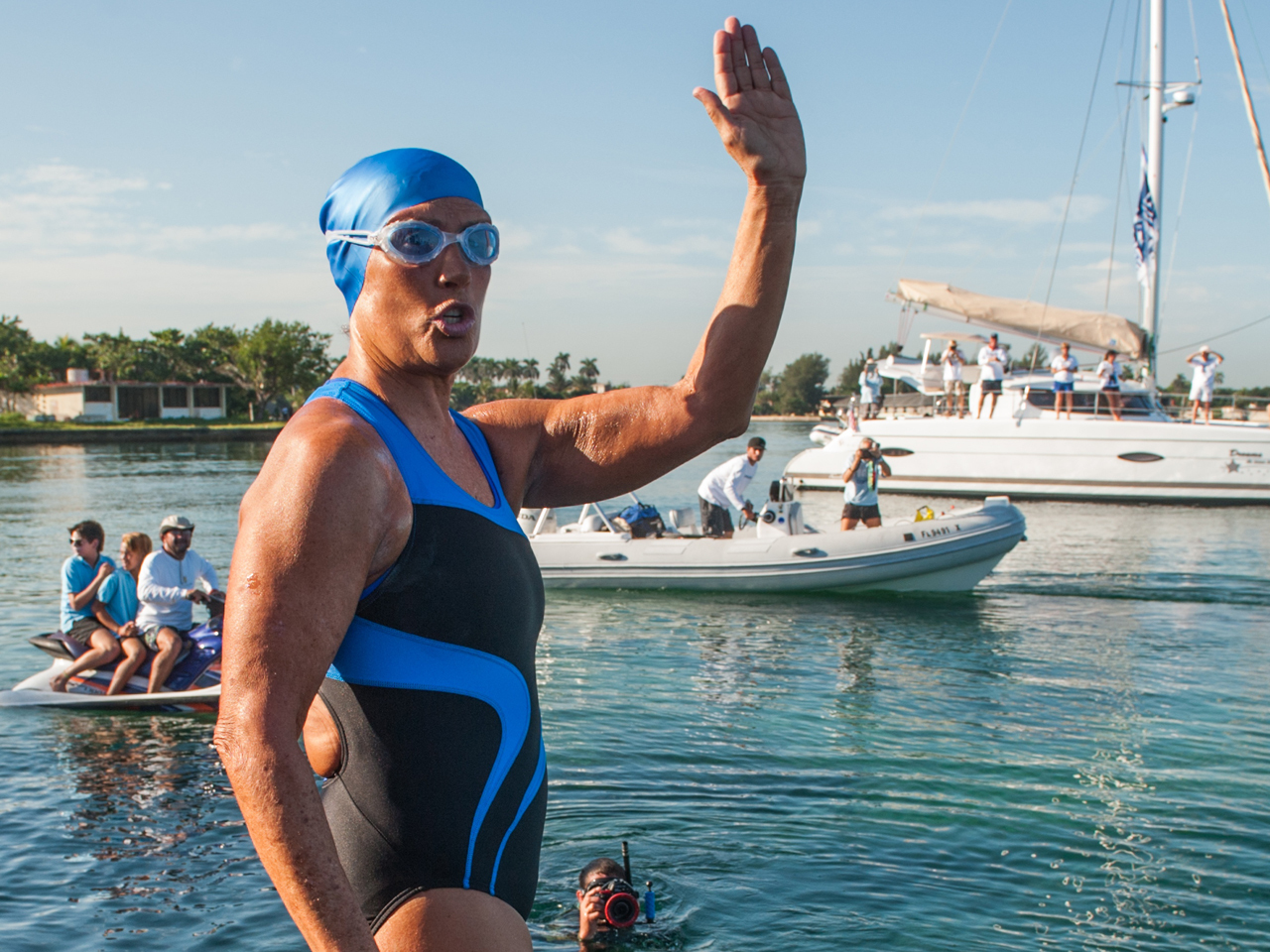 Fresh off her record-breaking swim from Cuba to Florida, the 64-year-old long-distance swimmer will dive into different waters starting at 8:30 a.m. ET on Tuesday. She's set to complete a 48-hour continuous "Swim for Relief" in New York to support Sandy recovery efforts.

"I'm from New York City and last year I was in town right after Sandy hit...You feel such tremendous compassion for people," Niad told CBSNews.com. "You might sit down and write a little check for disaster relief -- whatever you can afford...And then its' not front page news and you forget about it....Well thousands of people haven't forgotten about it -- Jersey Shore, Staten Island, Far Rockaway -- all over New York and New Jersey."

Sandy caused roughly $70 billion in damage across the Eastern seaboard, destroying 12,500 homes in New Jersey alone. To date in Ocean County, up to 25,000 residents are still displaced from their homes.

Some of those residents will get help from the New York City event, which will raise funds for AmeriCares, a nonprofit global health and disaster relief organization that delivers aid to people in need. P&G brands are underwriting the production costs to maximize funds donated.

And the production is pretty elaborate. Nyad will swim in a pool that will be erected in Herald Square, right outside of Macy's.

"It's a very innovative engineering feat...It's almost Olympic length...The night before the event, they are going to put it up and put 500,000 gallons of water from New York City fire hydrants at 48 degrees into the pool. And overnight, by the time I start swimming in the morning, they're going to bring that pool up to 82 degrees."

Nyad's estimated swim distance is 96 miles, the equivalent of swimming from Manhattan to Philadelphia.

"It's going to be a spectacular, fun event. For me, not so fun -- 48 hours I take seriously," she said. "When it's over we're going to give a big fat check to AmeriCares and all that money goes will go right to Sandy relief."

Nyad will invite those celebrity guests -- and other supporters -- to join her in the pool during her two-day swimming stint.

"It's no joke, it's an endurance moment for sure," she said, citing last month's 53-hour Havana-Key West trek. "So, I'll be more than ready to do it."

The upcoming 48-hour, non-stop swim comes on the heels of Nyad's 110-mile swim from Cuba to Florida.

"You dream about something for so long and you envision it -- literally 35 years ago I envisioned swimming all the way from Cuba and seeing the palm trees on that Florida shore," Nyad said. "And four times -- once way back when I was young and then three more times in my 60s, I tried like hell. But the dangerous jellyfish out there, the currents, the Gulf Sea itself, sudden thunderstorms that can be life-threatening. It's Mother Nature on steroids, this particular stretch. I hadn't made it...so to finally see the oasis of that shore and swim in there with my teammates and walk up was truly a deep, profound contentment and dream come true of never having given up on it. I think I'm more proud of that than actually doing it -- that I didn't give up on it."

"When I looked at those people's faces -- and I agree I was a little dazed when I got up on shore [because] my body had been through a lot -- but the couple of thousand people there -- when I looked around and they were crying -- grown, big muscular men with just sheets of tears coming down their faces...That's that message: that you reach for the stars," she continued. "You become everything you can be and you don't give up on your dreams, and you do it at this age, this advanced age -- at 64...Worldwide over the last month or so since the event, what I've heard from people -- and I saw it in their eyes on that beach -- is that 'I want to live this way. I don't want to be fearful.' That's pretty gratifying."

Looking ahead, Nyad hopes to do a swim for relief with AmeriCares at least once year to help raise money for various relief projects. Also in the works? A book and a possible one-woman show.

"As a swimmer, it was all about Cuba. It was only ever Cuba. So that's done. I won't be in the ocean anymore," said Nyad.

But that doesn't mean Nyad will be kicking back and relaxing.

"I don't want to lie back on the couch and watch life pass me by, that's for sure," she said.