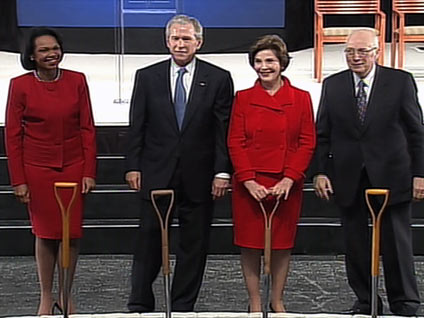 Cheney said that Mr. Bush, whose approval rating upon leaving office was just 22 percent, always understood that "judgments are a little more measured" with the passage of time. He added that Americans "can tell a decent, goodhearted stand up guy when they see him."

Cheney lauded Mr. Bush as a president who refused "to put on airs," stating that he was thrilled to find that the most powerful person he knew was "among the least pretentious." He said Mr. Bush was someone who could "walk with kings, yet keep the common touch," adding that "there were no affectations about him at all - he treats everyone as an equal."

He spoke admiringly of Mr. Bush's actions in the wake of the Sept. 11th attacks, telling the former president that "because you were determined to throw back the enemy, we did not suffer another 9/11 or something even worse."

Cheney, who (unlike Mr. Bush) has been a vocal critic of President Obama, also took a shot at the current administration.

Speaking of his expectation that construction would move quickly on the presidential center following the groundbreaking, Cheney quipped that "this may be the only shovel ready project in America." The reference was to the Obama-supported stimulus package that Republicans have criticized as ineffective.

Mr. Bush, dressed in a suit affixed with an American flag pin and a blue tie, followed Cheney to the podium. The former president said Cheney had been "the right pick" for vice president in 2000 and told an enthusiastic audience that he is "proud to call him friend." (In his book, Mr. Bush writes that he considered replacing Cheney in 2004.)

Mr. Bush, who noted he has been doing interviews to "peddle my book," spoke of the accomplishments of his presidency, among them helping AIDS patients, aiding struggling societies and assisting storm victims..

He said he could "remember vividly young girls going to school in Afghanistan and voters waving purple fingers in the air," and said his decisions in office were guided in part by the belief that "freedom is universal."

He added that he supports "engagement in the world" on the part of the United States and said that leaders have a responsibility to "do what is necessary and right" even if it isn't popular.

"I really don't miss much about Washington, but I do miss being your commander in chief," the former president said.

Among the other speakers at the groundbreaking for presidential center, which is located on the campus of Southern Methodist University, were Condoleezza Rice and Laura Bush. The audience included soldiers from nearby Fort Hood, donors to the center and former Bush administration officials including Ari Fleisher, Josh Bolten, Karen Hughes and Dan Bartlett.

The presidential center, which the former president said will be guided by his core principles, will have three components: An archive, museum, and the policy institute.

The museum, he said at the time, will tell the story of the Bush presidency "through my most consequential decisions."

"Visitors will see the bullhorn I used in my first visit to Ground Zero, a replica of my Oval Office, and our very own 'Texas Rose Garden,'" he said.

The policy institute, which will be called the George W. Bush Institute, will be "a vibrant hub of principled thought and practical action," the former president added. The institute has already begun work, and one of its focuses has been a Laura Bush-led initiative to empower women and girls around the world.

Mr. Bush said today that the $300 million center, which is planned to be 225,000 square feet, is already fully paid for via donations. It is scheduled to open by 2013.