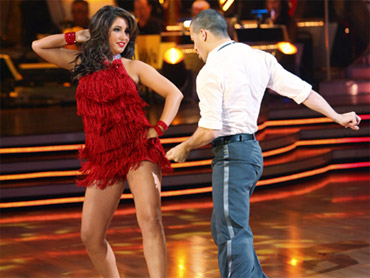 When all the votes were counted, Bristol Palin failed to dance past Jennifer Grey for the Mirror Ball trophy on ABC's "Dancing with the Stars."

Marc Malkin, of E! Online, told CBS News, "Was it an upset? No, technically the best dancer won -- but the Tea Party, the GOP -- they're upset."

Even with a series of perfect scores and celebrity support, Tracy pointed out, Grey seemed unable to stop the runaway momentum of Bristol Palin, cheered on throughout the competition by her famous mom.

Karin Tanabe, a reporter for Politico.com, said, "She really was the most improved, but seeing Sarah Palin in the audience so much definitely made an impact."

Many believe Sarah Palin's conservative base rallied to vote Bristol into the finals. In an ABC News/Washington Post poll, 54 percent say political clout pushed her ahead of the pack, while just 14 percent think she made it on her dancing skills.

The controversy peaked last week, when pop star Brandy got the boot as conservative bloggers campaigned for Bristol. An enraged viewer in Wisconsin shot out his TV set, and Bristol Palin received death threats, including a letter filled with white powder, later revealed to be talcum.

Sarah Palin missed her daughter's third place finish. She's launching her book tour, but tweeted her congratulations to Grey, saying, "Competition is good for everyone. Be inspired by those who step up to challenges & improve w/each step..."

The show set a record for ballots cast, and for its controversial conclusion.