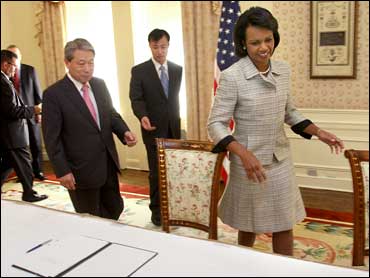 Even as the ongoing financial crisis has shaken the U.S. to its core, diplomacy plods on.

While Sarah Palin came to New York City to take a crash course in Diplomacy 101 by meeting assorted world leaders and luminaries, the once and future Professor Condoleezza Rice (who not so many years ago gave then-presidential candidate George W. Bush a crash course in foreign policy and who is now America's top diplomat) was waging an uphill battle to put the Bush administration's final policy stamp on such troubled relationships as Russia, Iran and North Korea.

While Russia may not be the superpower the Soviet Union was, it still has the chops to cause Washington trouble on the world stage. The Bush administration sees Russia as the aggressor for its recent invasion of its neighbor, Georgia, and wants Moscow to pay a price for its bad behavior.

"The aggressor always lands the first punch," a senior State Department official said this week, but "they don't usually win in the end." Still, "they're going to be nasty to this administration on purpose" for the next few months.

Indeed, Russia, along with China, prevented the U.S. and its European allies - Britain, France and Germany - from getting tougher sanctions imposed on Iran.

Taking what it could get, the Bush administration settled for a fourth U.N. Security Council draft resolution which merely reinforced the sanctions imposed in previous resolutions.

Yes, there was a bit of good news: a show of unity among major powers that Iran's nuclear ambitions should be stopped. But the draft did not include any tough new sanctions which President Bush and Secretary Rice had favored.

Why settle for such a weak outcome? "It doesn't matter if they're acting badly in some areas," the senior State Department official said. "We still have to deal with them in other areas."

Washington and its allies in the so-called 6 party talks - China, Japan, Russia and South Korea - are still looking for a verification agreement with North Korea, one that would satisfy the world that Pyongyang has really decided to give up its nuclear weapons program.

Efforts to verify the North Koreans' promise to abandon its nuclear ambitions seemed to be going in the right direction until a few weeks ago and are now stalled (most believe because of the uncertain status of Kim Jong Il's health). Even as unconfirmed reports swirl about the North Korean leader's having suffered a stroke last month, Pyongyang has begun making moves to re-start its nuclear processing facility at Yongbyon.

Asked about the steps North Korea has taken in the past few weeks, the Bush administration's chief negotiator, Assistant Secretary of State Christopher Hill, told reporters (as if there was any doubt): "Yes, we are concerned about this. That's a quote."

Just a few months ago it looked like the painstaking efforts to persuade North Korea to give up its nuclear program were going to pay off. They would get a huge package of economic benefits, and Washington would remove North Korea from its state sponsor of terrorism list. But without the verification agreement, something that falls within international standards in the area of non-proliferation activities, the Bush administration is not acting to remove them from the terrorism list.

What still could be a big foreign policy success story is now very much in flux. In New York this week Rice and Hill met with their allies in the process and made it clear they have not given up on concluding an acceptable deal.

If the Bush administration is going to score a triumph it will need not only to make a final push itself but also its ally China to pitch in and use its leverage on the North Korean leadership to keep moving forward.

Most important of all, of course, is the uncertain status of Kim Jong Il himself. If North Korea's leadership is undergoing a process of change, it may well be beyond the ability of any outsider to get them to close such an important deal.

So, diplomacy plods on. In many ways it is the nature of the craft. But in the politically charged climate of a presidential election year (and, moreover, in the quest for historical legacy), President Bush and Secretary Rice would have hoped for more.