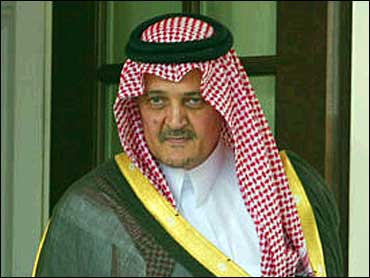 
Last week's report issued by the Congressional Joint Inquiry into the tragic events of Sept. 11, 2001 ignited a firestorm in many quarters — on Capital Hill and with the families of Sept. 11 victims — but its biggest impact was felt in the inner sanctums of Saudi Arabia's royal palaces.

Virtually everyone was upset by the 28 pages left blank in the copies of the 900-page report made public, 28 pages referring to links the Saudis had, or might have had, with terrorists.

The reaction was almost immediate. Outraged senators were quick to say most of the material which was redacted (the government's fancy word removing information from the report) could have been left in with no harm to U.S. security interests. Then Sept. 11 family members and their lawyers wondered aloud why the American public could not know what ties might exist between Saudi government officials and the Sept. 11 terrorists.

It didn't take long before the Saudi damage control operation swung into high gear. Riyadh signaled Washington it wanted to send its foreign minister to see President Bush at the White House. Like, the next day. Meetings are not normally put on the president's calendar that quickly, especially when the request comes from someone who has to fly halfway around the world just to sit down in the Oval Office.

But such are the close ties (read "political clout") between the Saudis and the Bush administration that Riyadh's request was granted. The word went forth: Foreign Minister Prince Saud al-Faisal would ask the Bush administration to de-classify the information contained in the 28 blank pages. "We can deal with questions in public, but we cannot respond to blank pages," said Prince Bandar bin Sultan, the Saudi ambassador to Washington.

As politicians from both parties hammered the Saudis and broadcast commentators and op-ed authors speculated on what was in the missing pages, the Saudi foreign minister winged his way to Washington. Before he was able to make his case, however, the White House pre-empted the outcome and gave its answer to the anticipated Saudi request: no, the Bush administration had already decided, the missing information would not be de-classified. National security reasons were cited by President Bush, who said the investigation was ongoing and declassification "would reveal sources and methods that will make it harder for us to win the war on terror."

After Prince Saud al-Faisal had his meeting with the president he walked to the cameras and microphones on the White House driveway to publicly defend his kingdom, which, after all, was the purpose of his trip. "It is an outrage to any sense of fairness that 28 blank pages are now considered substantial evidence to proclaim the guilt of a country that has been a true friend and partner to the United States for over 60 years.

"The Kingdom of Saudi Arabia has been wrongfully and morbidly accused of complicity in the tragic terrorist attacks of Sept. 11." Accusations, Prince Saud said, partly in answer to congressional comment, which "is based on misguided speculations, and is borne of poorly disguised malicious intent." To further persuade critics in the U.S. the minister also met privately with print reporters to explain the Saudi position and made himself available for television interviews. Knowing they had lost the battle to the White House before his meeting started, the Saudis and their public relations advisors in Washington tried to win the larger war for public opinion.

Eventually, of course, the contents of the 28 blank pages will come to light, although that is likely to take months or years. The sparring statements and media appearances of the past week following the report's publication provide only the latest high profile example of what happens when international politics collides with national security and is subjected to interpretation by public relations advisors — from all sides.