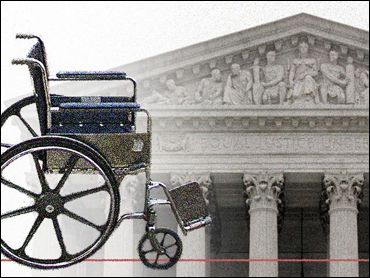 Seniority rules in the workplace, said the Supreme Court Monday, even if that means bumping a disabled worker from a special job.

CBS News Correspondent Barry Bagnato reports the case involves a former US Airways customer service representative who was given a mail handler's job after he hurt his back lifting cargo. When two senior workers bid for his job, he lost it. He charged discrimination.

The Americans with Disabilities Act forbids job discrimination against the disabled and requires employers to offer reasonable accommodations.

But the court said it would be a hardship on employers to undermine seniority systems. Disabled workers can present evidence that an accommodation would be reasonable.

"I don't know that this is a 'setback' for disabled people as much as it is a refusal by the court to expand the scope of the ADA by creating a general rule about seniority," said CBSNews.com Legal Consultant Andrew Cohen. "The court did rule that seniority still makes a difference in accommodating a disabled person on the job but the Justices also recognized an exception to that general rule which probably will help some disabled people in some circumstances."

Lawyers for Robert Barnett had argued that the civil rights law that entitled disabled golfer Casey Martin to a cart on the PGA Tour should also ensure the airline customer service representative a job he can physically handle.

The Supreme Court threw out a lower court's finding that Barnett's back injury gave him first choice of jobs at US Airways over his more senior co-workers. The justices sent the case back for further review.

US Airways had appealed, asking whether the ADA trumped seniority systems.

"We answer that ordinarily the ADA does not require that assignment," Justice Stephen Breyer wrote.

He said that it's up to individual employees to show why their case would be an exception.

This ruling will affect non-union companies that have seniority systems.

Under the US Airways seniority system, about 14,000 customer service employees receive duties, shifts, transfers and holidays based on experience.

Barnett sought a transfer after hurting his back loading baggage at San Francisco International Airport in 1990. He was given a job in the mailroom, but employees with more seniority later requested the same position. Under seniority rules, they could bump him to a less desirable job.

Barnett sued in 1994 under the ADA and won in lower courts. The 9th U.S. Circuit Court of Appeals said employers cannot use a seniority system to avoid seeking solutions for disabled employees.

The 5-4 decision continues the court trend of narrowing the reach of the ADA. The court recently ruled against an assembly line worker with carpal tunnel syndrome, finding that medical conditions that only prevent someone from doing some workplace tasks do not qualify as a disability under the law.

"Everyone knew a decade ago when the ADA was passed that the federal courts would have to refine it and define it," said Cohen, "and this decision is just another example of that. It was a poorly-worded ambiguous statute and it has given the courts one big constant headache since it was enacted."

In March, Justice Sandra Day O'Connor said the Supreme Court's term will likely be remembered as the "disabilities act term" for all the cases dealing with the civil rights law. She also criticized the law, calling it "an example of what happens when...the sponsors are so eager to get something passed that what passes hasn't been as carefully written as a group of law professors might put together."