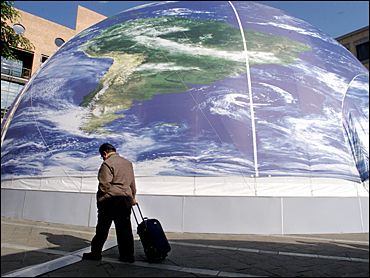 The Earth Summit 10 years ago in Rio de Janeiro grandly resolved to save all of nature, from the humblest algae to the majestic elephant. And it agreed the planet's delicate climate urgently needed protection before global warming rises to unbearable levels.

How to fulfill that sweeping vision — while lifting billions of people from crushing poverty — became the difficult job of delegates to the World Summit on Sustainable Development, which closed Wednesday.

And in the end, the world summit turned out much like sustainable development itself: Slow. Unspectacular. A handful of small victories and some promising new initiatives.

The goal of sustainable development is to promote economic growth and alleviate poverty while protecting the environment.

"There isn't a debate, there is no dialogue. It seems to be a dialogue of the deaf," Chavez said, saying hard-hitting rhetoric by heads of state was not reflected in the summit's action plan.

Non-governmental organizations also slammed the plan which repeated many pledges already made by countries on issues like aid, trade and preserving natural resources, but contained few new promises of concrete action.

"We should never have such shameful summits again," said Ricardo Navarro, chairman of Friends of the Earth International.

"We feel anger and despair because world leaders have sold out to the WTO and big business. They have done nothing for the poor," he added.

The business community weighed in with its own gentle criticism. "The view of business could be summarized in the words of Elvis Presley: 'A little less conversation, a little more action."' said Business Action for Sustainable Development.

As a follow-up to the 1992 Rio Earth Summit, Johannesburg aimed to set out ways to implement the goals agreed 10 years ago on getting the global economy to work for the poor as well as the rich and protect the planet for future generations.

The summit's "plan of implementation" contained some news. Countries pledged to get sanitation to at least half the 2.4 billion people who lack it today by 2015, to minimize the impact of harmful chemicals by 2020 and to restore endangered fish stocks by 2015.

But it set no target for boosting renewable energy, like wind and solar power, despite attempts by European and Latin American states which called for better technology to help get power to the poor and reduce pollution.

While those who were disappointed blamed the "usual suspects" — selfish rich countries, big business, the oil lobby — many pointed the finger at the process itself.

Other delegates were even more skeptical.

"International bureaucrats exist to keep themselves in jobs. The process is more important than the result. It is a completely meaningless waste of money," Mukhamed Tsikanov, a Russian deputy trade minister, told Reuters earlier in the week.

South African President Thabo Mbeki was clearly delighted with the way his country had hosted the event, which suffered none of the major violence that marred previous summits in Seattle and Genoa.

"The people of South Africa were an important part of the success of this summit," he told a news conference.

But many delegates doubted whether it was worth the massive cost.

"This summit and all the preparations probably cost the world a billion dollars. It would have been better spent buying 500 million solar cookers," Deling Wang, head of the non-governmental organizations' energy caucus, told Reuters.

But many of the non-governmental organizations were reluctant to call for an end to summits.

"The United Nations is the only forum we have at this time as a counterweight to the World Trade Organization," said Meena Raman, a campaigner with the Third World Forum.

Although highly critical of what she saw as Johannesburg's failure to deliver for the world's poor, Raman said it had not been a total waste of time.

"It was important for us to see where governments stood. This was a check, a benchmarking of governments," she said.

Whether or not there will be another Earth Summit may depend on how countries stick to the promises they made.

The world's attention was far more focused on Rio in 1992, than on Johannesburg in 2002, partly because people were losing faith in the leaders' ability to deliver.

"Rio was a failure, we can see that now," said Tommy Remengesau, president of the tiny Pacific island state of Palau. "But we can't judge the outcome of Johannesburg yet — We'll have to see what happens in two, maybe five, years"