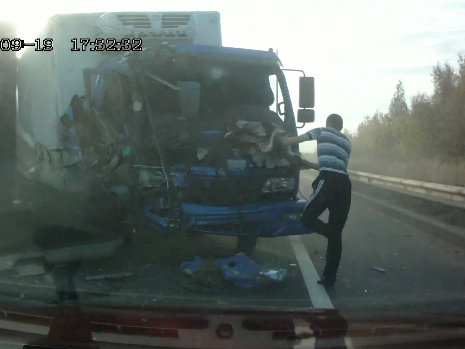 (CBS News) When it comes to near-fatal traffic accidents, the video above is as close as it gets. Watch two trucks collide and how lucky one driver is in the aftermath. There is a long build-up, but the actual accident and unbelievable moment happens at about 51 seconds into the clip.

The shocking, caught-on-tape, dash cam footage was posted by YouTube user Maxim Malygin and allegedly took place near Vladimir, Russia, showing the truck driver seemingly propelled through the windshield but appearing to be totally unharmed in the aftermath. Not even a scratch! I've watched the video a few times now and my jaw drops every single time at how lucky the man is (especially since he does not appear to be wearing a seat belt.)