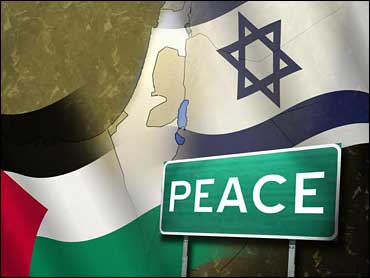 Israel has agreed to release some prisoners in a gesture to strengthen the government of Palestinian Prime Minister Mahmoud Abbas, but it might backfire as Palestinians demand freedom for all 5,000 prisoners.

"It's an injustice and it signals to the terrorists that they have nothing to fear," leader Shiffra Hoffman told Berger. "They can go and attack with impunity because they'll soon be out."

Israeli Foreign Minister Silvan Shalom promised Israel would not release terrorists with blood on their hands.

"It's very clear that those will stay in prison," he said.

"Not releasing all prisoners will shape a major violation and cancel the initiative (truce)," said Hamas leader Abdel Aziz Rantisi. Nafez Azzam of the smaller Islamic Jihad said, "all prisoners must be released without discrimination."

Israeli Defense Minister Shaul Mofaz said Sunday that in the week since Israel turned over security control of the Gaza Strip to the Palestinians, there have been fewer warnings of terror attacks and less incitement to violence, but warned that the Palestinians still had to crack down on militants before Israel would take further steps.

Palestinian security forces Monday said they had detained an 18-year-old woman in the Gaza Strip who was planning a suicide bombing in Israel. Police began searching for her after she left a note at home declaring her intention to carry out a suicide attack. She was released to her family.

While Israel welcomed the fact that the Palestinians thwarted a bombing, officials see the woman's release to her family as too mild a punishment.

The relative calm, with few incidents of violence reported on both sides, appeared to augur well for progress along the "road map," an internationally backed peace plan leading to a Palestinian state in 2005.

The positive trend started a week ago, when the three main Palestinian groups declared a temporary halt to attacks against Israelis, and the two sides agreed on handing control of Gaza and the West Bank town of Bethlehem from Israeli to Palestinian control.

The prisoner issue, however, threatened to unravel to delicate fabric of understandings to end 33 months of bloody Palestinian-Israeli violence.

Israel's Cabinet on Sunday set out guidelines for releasing prisoners, and media reports said the total freed would be several hundred. They would include inmates near the end of their sentences or held without charges, those under the age of 18 or over 60, and women, Israeli officials said.

Members of militant groups like Hamas and Islamic Jihad that oppose peace with Israel, and Palestinians who carried out or planned violent attacks against Israelis, would not be included.

Palestinian officials and leaders of Islamic groups complained that Israel had not gone far enough.

Palestinian security chief Mohammed Dahlan said, "We have discussed with the Israelis our disappointment after Israel's selective policy of releasing prisoners."

However, an Israeli official, speaking on condition of anonymity, said that any prisoner release would be only a goodwill gesture, as the issue is not part of Israeli-Palestinian agreements.

The "road map" plan does not mention release of prisoners; its only reference is an oblique mention of an earlier, failed U.S. truce plan that called for Israel to free Palestinians "who have no association with terrorist activities."

Israelis credit the arrest of militants with helping to reduce terror attacks, and many Israelis, including relatives of victims, oppose releasing them.

Israeli Prime Minister Ariel Sharon said after the Cabinet meeting, "The release would be carried out in tightly supervised, small and measured doses in relation to proven Palestinian actions in the security sphere; in other words, if terror continues and there is no genuine Palestinian effort to fight and eliminate it, the releases will stop."

On June 30, the Islamic groups, Hamas and Islamic Jihad, declared a three-month halt to attacks against Israelis, and Fatah called a six-month truce. The declarations were not negotiated with Israel. The groups added demands, including release of prisoners, but at the time, they did not pose them as conditions for the truce.

Speaking to reporters after meeting Dahlan on Sunday, Mofaz said Israel would make every effort to allow the "road map" to succeed, but he put the burden on the Palestinians.

"We will demand exacting fulfillment of all the commitments taken on by the Palestinians," he said, noting that there has been some progress, "but there is a long way to go."

Palestinians blame Israel for the ongoing violence and demand removal of the obstacles that have decimated the Palestinian economy, wrought hardships and frayed tempers, especially roadblocks and closures all over the West Bank.

Mofaz pledged to ease restrictions, but only "according to the results of the security activities they have taken in the areas under their responsibility."