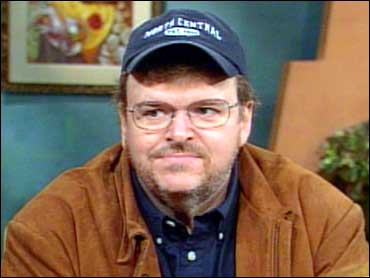 Disney has ordered a subsidiary not to distribute a Michael Moore film critical of President Bush's stance on terrorism, according to a newspaper and Moore's Web site.

The New York Times reports Disney has barred Miramax films from distributing "Fahrenheit 911," an upcoming film in which Moore explores alleged connections between the Bush family and wealthy Saudis, and criticizes the president's counter-terrorism policies both before and after Sept. 11.

A Disney executive says it told Miramax last May that it did not want to be connected to the North American distribution of the film because it could be politically divisive.

But Moore claims Disney is worried it could lose tax breaks it gets in Florida, where the president's brother Jeb Bush is governor. Disney denies that, according to The Times.

Miramax says its deal with Disney only allows the company to block distribution of a film if it is over budget or gets an NC-17 rating, neither of which appears to apply to Moore's movie. The two companies could go to mediation over the dispute.

"I would have hoped by now that I would be able to put my work out to the public without having to experience the profound censorship obstacles I often seem to encounter," Moore wrote in the statement on his site.

"Some people may be afraid of this movie because of what it will show," Moore wrote. "But there's nothing they can do about it now because it's done, it's awesome, and if I have anything to say about it, you'll see it this summer — because, after all, it is a free country."

Miramax bought the film last May when Mel Gibson's Icon Pictures backed out, triggering complaints by conservatives to Disney. Overseas distribution rights have already been sold.

"Fahrenheit 911" will be one of 18 films in competition next week at the Cannes Film Festival, Moore wrote.

The newspaper says Mirimax could find another distributor for North America, but that doing so would be costly.

Moore is the director of films such as "Roger & Me" and "Bowling for Columbine," for which he won an Oscar. He has stirred controversy before, calling Mr. Bush a "deserter" earlier this year, and earning both cheers and boos when he questioned the legitimacy of Mr. Bush's 2000 election at the 2003 Academy Awards.

Distribution of his book "Stupid White Men," a broadside against the Bush administration, was delayed because it was due out shortly after Sept. 11.