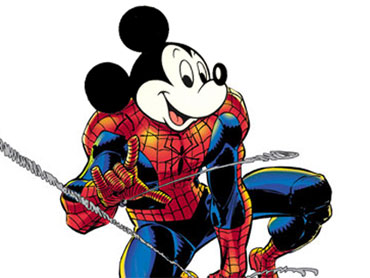 The Walt Disney Co. said Monday it is acquiring Marvel Entertainment Inc. for $4 billion in cash and stock, bringing characters like Iron Man and Spider-Man into the family of Mickey Mouse and WALL-E.

Under the deal, Disney will acquire ownership of 5,000 Marvel characters. Many of them, including favorites such as the Fantastic Four and the X-Men, were co-created by comic book legend Stan Lee.

Disney said Marvel shareholders will receive $30 in cash, plus 0.745 Disney shares, for every Marvel share they own. That values each Marvel share at $50 based on Friday's closing stock prices.

Analyst David Joyce of Miller Tabak & Co. said the acquisition will help Disney appeal to young men who have flocked to theaters to see Marvel's superhero fare in recent years. That contrasts with Disney's recent successes among young women with such fare as "Hannah Montana" and the Jonas Brothers.

"It helps Disney add exposure to a young male demographic it had sort of lost some balance with," Joyce said, noting the $4 billion offer was at "full price."

Disney said the boards of both companies have approved the transaction, but it will require an antitrust review and the approval of Marvel shareholders.

None of those films has been released by Disney.

Marvel earned a net profit of $206 million last fiscal year, up 47 percent from a year earlier, on revenue of $676 million, as it took movie production in house instead of just cutting licensing deals.

Ike Perlmutter, Marvel's Chief Executive Officer, said, "This is an unparalleled opportunity for Marvel to build upon its vibrant brand and character properties by accessing Disney's tremendous global organization and infrastructure around the world."

Disney last made a big purchase in 2006 when it acquired Pixar Animation Studios Inc., the creator of the "Toy Story" franchise, for $7.4 billion in stock.