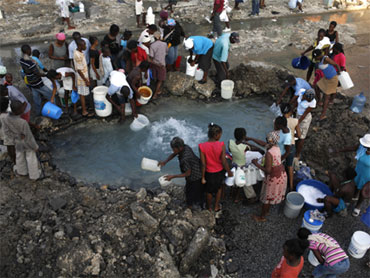 A lack of sanitation threatens to create killer diseases in the vast refugee camps where hundreds of thousands of earthquake survivors have crammed in together, relief officials said Saturday. The need for latrines has joined food, water and shelter as a major concern.

Just one portable toilet serves about 2,000 people in a sprawling camp across from the collapsed National Palace. Most use a gutter next to where vendors cook food and mothers struggle to bathe their children.

"We wash the vegetables first from water brought in by trucks, but a lot of times the water isn't clean," said Marie Marthe, 45, cooking a large pot of collard greens, carrots and goat as flies gathered on her daughter's diaper. "We don't have any choice."

With an estimated 1 million made homeless by the quake, survivors have crammed into nearly every open space left in the capital, so tightly that finding a place to dig latrines is hard. "In some parks there is no physical space," said Silvia Gaya, UNICEF's coordinator for water and sanitation.

"As of yesterday we were in the process of digging latrines for about 20,000 people," Gaya said, adding that 1,100 squatting platforms were arriving Saturday, to be distributed in camps and covered with plastic sheeting for privacy.

The results of these efforts aren't yet evident in many places, exposing people to cholera, dysentery, tetanus; the mosquito-borne dengue and malaria, and other communicable diseases.

Some hospitals are already reporting that half the children they're treating have malaria. Although the rainy season won't start until April, thousands are living outside near standing water where mosquitoes breed.

Fumigation trucks to kill mosquitoes sprayed near camps across from the palace on Saturday.

Dr. Louise Ivers, Haiti clinical director for Partners in Health, said she fears "a mass outbreak of measles, which would really be potentially devastating for a camp where there are 10,000 people living."

Food distribution, at least, was becoming more organized. The World Food Program started its first systematic food distribution system on Saturday, handing out coupons that only women can use to collect food at 16 sites starting Sunday.

The idea is to ensure a dependable supply for families and prevent young men from forcing their way to the front and or stealing food from weaker people in line. The coupons entitle each family to 55 pounds of rice.

But the effort to respond to overwhelming emergency medical needs have suffered a setback, with the U.S. military halting flights carrying Haitian earthquake victims to the United States in an apparent dispute between states and the federal government over the cost of their care.

"We can't fly anyone without an accepting hospital on the other end," said Capt. Kevin Aandahl, spokesman for U.S. Transportation Command.

Quake survivors remain exposed not only to each other, but to the elements. Signs begging for help in English - not Haitian Creole - dot nearly every street corner in Port-au-Prince. It could take weeks to get the 200,000 tents needed for Haiti's homeless, said Marie-Laurence Jocelyn Lassegue, the culture and communications minister. Haiti now has fewer than 5,000 donated tents and coordinating the aid operation remains a problem.

Some Haitians are so fed up with the camps that they are making a risky return to destroyed homes - the only semblance of property they have left.

"The situation is only getting worse," said Josielle Noel, 46, who was working with dozens of neighbors to rebuild in the concrete slum of Canape Vert, an area devastated by the Jan. 12 quake.

Tired of waiting for government help, they lugged heavy bundles of wood and tin up steep hillsides, putting up new structures amid the rubble.

"Even if it's unsafe, I can't imagine leaving. Even if the government helps, it will come too late. This is how it is in Haiti," said Noel Marie Jose, 44.

Jose and other families said they were worried both about the coming rainy season and fear they may lose their plots because they lack clear title or the government does not want them to rebuild on unsafe land.

Reconstruction, resettlement and land titles are all priorities of the government of President Rene Preval - but so far in name only.

The government has been nearly paralyzed by the quake, which destroyed its infrastructure and killed many officials. So far it has focused on appeals for foreign aid and dozens of meetings with potential outside contractors to discuss debris removal, sanitation and other long-term needs. It still hasn't produced detailed emergency response and recovery plans.

Its first priority is moving people from areas prone to more quakes and landslides into tent cities that have sanitation and security, but these resettlement camps have yet to be built.

About 200,000 people are in need of post-surgery follow-up treatment and an unknown number have untreated injuries, said Elisabeth Byrs, an official of the U.N.'s humanitarian coordination office. But she said sanitation is increasingly a major concern.
By Associated Press Writers Frank Bajak and Paisley Dodds; AP writers Evens Sanon and Michelle Faul contributed to this report