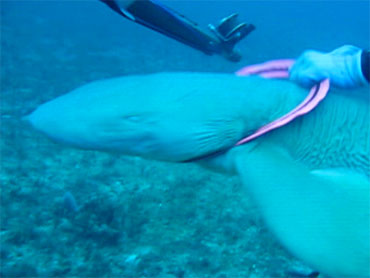 Forget about swimming with sharks, can you imagine wrestling one?

That's just what veterinarian Chip Garba did last Saturday when he saw a nurse shark with a Frisbee ring around its neck.

Dive shop owner John Dickinson was diving with Garba off the coast of southern Florida when they came upon the nurse shark laying dormant on the ocean floor. After tugging on its tail, the shark began to swim away. That's when Garba went after the shark, seized it with both arms and wrestled with it until he was able to remove the ring. The shark swam away safely. The incident was recorded on video by Dickinson.

He says the shark was emaciated -- probably from an inability to eat properly, because he wasn't able to open his jaw the way sharks do because of the ring around his neck. The Frisbee also might have been preventing it from getting the oxygen he needs -- sharks need a flow of water through the gills, and the ring might have been blocking a few of the gills.

Garba joked with "Early Show" co-anchor Harry Smith, saying this is probably the first and last time he'll ever wrestle a shark.

Garba added that people have told his wife she should increase her life insurance policy on him.

Dickinson, who was just filming the fish, said he was just trying to frame the shark when his friend's hand came into the picture.

Dickinson said, "I saw my buddy Chip come up behind and grab this ring and he actually held onto it, and used it to pull the shark in and get the shark in a bear hug."

To hear more of Garba and Dickinson's account of their shark rescue, click on the video below.