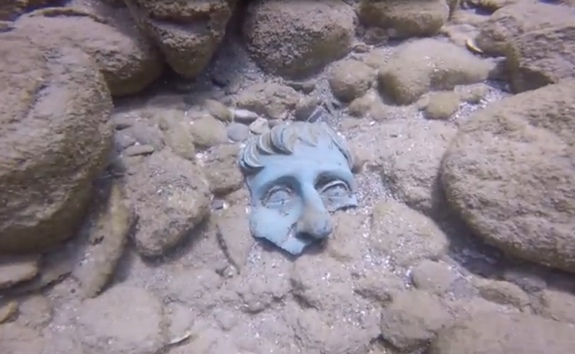 One civilization's trash is another civilization's treasure. A ship in Israel's Caesarea Harbor was filled with bronze statues headed for recycling when it sank about 1,600 years ago. Now, thanks to a chance discovery by a pair of divers, archaeologists have salvaged a haul of statuary fragments, figurines and coins from the seafloor.

The Israel Antiquities Authority (IAA) announced May 16 the discovery of the Late Roman-era artifacts, which include a figurine of a moon goddess and a lamp carrying the likeness of a sun god. Archaeologists also found two stashes of coins, still clumped in the shape of the vessel that once carried them.

"A marine assemblage such as this has not been found in Israel in the past 30 years," Jacob Sharvit, director of the marine archaeology unit of the IAA and Dror Planer, deputy director of the unit, said in a statement. "Metal statues are rare archaeological finds because they were always melted down and recycled in antiquity. When we find bronze artifacts it usually occurs at sea. Because these statues were wrecked together with the ship, they sank in the water and were thus 'saved' from the recycling process." [See Photos of the Roman-Era Shipwreck and Treasures]

Two divers from the city of Ra'anana, Ran Feinstein and Ofer Ra'anan, discovered the wreck on the harbor floor and reported the find to the IAA, which organized an archaeological investigation. IAA divers found fragments of life-size bronze statues and a bronze lamp bearing the likeness of Sol, the sun god. They found a figurine of Luna, the moon goddess, and a bronze statue of a whale. There was a bronze faucet shaped like a boar with a swan on its head, and a lamp shaped like the head of a slave from Africa.

"The sand protected the statues; consequently, they are in an amazing state of preservation -- as though they were cast yesterday rather than 1,600 years ago," Sharvit and Planer said.

The ship appears to have hit stormy weather at the harbor entrance, drifting until it smashed against the seawall and sank. Archaeologists found the ship's iron anchors, which seem to have been hoisted into the sea in an attempt to stop the ship from drifting. They were broken by the wind and waves.

The ship wrecked during a key time in Roman history, Sharvit and Planer said. In A.D. 313, Constantine and Licinius issued the Edict of Milan, making Christianity legal to practice and returning confiscated property to Christians who had been persecuted. Constantine would later support the early Christian church financially and politically, and converted to Christianity himself.

In 2015, archaeologists found a cache of gold coins close to the location of the newly found shipwreck.