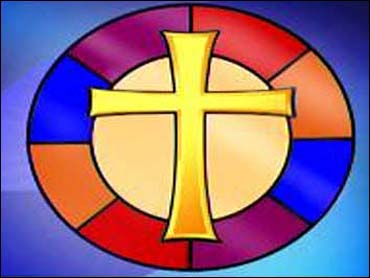 This column was written by Adele M. Stan.

Each of the Big Three networks, plus Fox's broadcast network, have rejected a paid advertisement from the United Church of Christ that bears the tagline, "God doesn't reject people. Neither do we." Viacom's gay-targeted cable channel, LOGO, has also rejected the ad, which conveys a message of inclusiveness, even depicting a gay couple.

The UCC's "ejector-seat" ad speaks to the rejection of various categories of people by unnamed Christian churches — a touchy subject for a nation that deems itself to be among the most God-fearing on Earth. It shows people who represent frequent targets of discrimination being ejected — into the air — from a church pew via a mechanism involving springboards hidden in the pews, controlled by an unseen party represented by an apparently white, male hand pressing a button.

First to be ejected is an African-American woman trying to quiet her crying baby. Next are two men who appear to be a gay couple, a man who looks to be of Middle Eastern descent and an elderly woman whose walker is tossed up with her. The spot ends with the contrasting message that the UCC church, a descendent of the early Puritan churches, rejects no one.

In rejecting the ad, the major broadcast outlets have been met with only murmurs of protest for what should be a boycotting offense. Sure, on the surface, ending the war in Iraq may be a larger priority for liberals, but the media's treatment of the Congregationalists (as UCC members are often called) speaks to how the war won support at its outset — through a media fearful of the taunts of right-wingers.

Ron Buford, coordinator and team leader of UCC's "God is still speaking" campaign, is the first to admit that the ad is, as he calls it, "edgy." In instances where the ad has been rejected, the reason commonly given or implied is that it is insulting to other churches (presumably those that reject blacks, single mothers, gay couples, Arabs and/or old people). A statement issued by MTV Networks, the parent company of LOGO, explained: "Our guidelines state we will not accept religious advertisements that may be deemed as disparaging to another religion."

Throughout the days of Jim Crow, several significant Protestant denominations looked the other way while individual churches refused entry to blacks. (Indeed, the Southern Baptist Convention was born in an 1845 schism from the broader Convention of Baptists when that body voted to bar slaveholders from work as missionaries.) Today, as reported by Adelle Banks of the Religion News Service, the gross majority of U.S. churches are racially homogeneous, with only an estimated 5.4 percent of churches being racially integrated, according to Michael O. Emerson, a professor of sociology at Rice University, and director of Rice's Center on Race, Religion, and Urban Life. Most Christian denominations continue to reject "practicing" gays, lesbians, and other non-heterosexuals, taking their cue, perhaps, from the largest — the Roman Catholic Church.

Like blacks, other minorities can be made to feel less than welcome in certain churches, while not all churches make it easy for the disabled to find their way into the pews.

"Throughout this campaign, the heart of our focus has been on the experience of the seeker," Buford said in a statement. "The issue is not anyone's actual intention to eject people. The issue is whether or not newcomers feel rejected. And we know they do and for a variety of reasons."

Welcome at the Table

A gay African-American, Buford surely knows of what he speaks. I have a bit of an idea myself. Several years ago, I found my eyes welling up as I sat in the pew of a United Methodist church whose congregation had declared itself "welcoming and affirming" to gays and lesbians. By happenstance, I was there on Communion Sunday, when the breaking of the bread and sharing of the wine is done in memory of Jesus Christ.

In the Roman Catholic Church — the church to which I was born — a similar rite forms the central element of the celebration of Mass. At the Methodist service, I was beckoned to partake: "All are welcome at Christ's table," said the minister. In my own church, I am banned from receiving communion for multiple reasons (divorce, fornication, lack of commitment to the heterosexual lifestyle). No one ever asked me for my papers as I stepped up to the Communion rail, but my church's stance is often stated from the pulpit, and there doesn't seem to be much point in stealthily taking a sacrament from an ostensible man of God who is sworn to refuse it to you.

Buford is clearly betting that there are more like me to be drawn from among Protestantism's own disaffected, at a time when the mainline churches are struggling to maintain their membership.

The name of UCC's Stillspeaking Initiative derived from a quotation that Buford, whose career roots are in corporate marketing, came upon: "Never place a period where God has placed a comma." The quotation belongs to that great theological philosopher, Gracie Allen. For his part, Buford has added a punch line: "God is still speaking." (Those who support the campaign wear lapel pins shaped like commas.)

This is not the first time Buford's shop at the UCC has kicked up network dust. A little more than a year ago, together with the Gotham advertising agency (which also produced the current ad), the Congregationalists tried to place a similar ad, one that Buford regards as less edgy than the current one, on the networks. All refused. (Just months later, ABC accepted paid advertisements from the religious right organization, Focus on the Family, whose leader, James Dobson, has vilified gay people.) The 2004 ad won the United Church of Christ the Multicultural Excellence Award from the Association of National Advertisers, beating out MasterCard and Microsoft. In an ironic twist, the ad yielded Buford a spot among the LOGO network's "the Top 100 most interesting, influential and newsworthy LGBT individuals."

To their credit, a number of cable channels are running the current ad. They include CNN, Lifetime, BET, Hallmark, History, TBS, TNT, E!, Lifetime, SI-TV, and Azteca America.

The UCC is hoping to keep the ads airing through Mother's Day, raising grass-roots money by urging supporters to "Give yo' momma a comma."

After its funny, searing, ejector-seat visual commentary, the UCC ad switches mood, showing a diverse array of people standing together and smiling. "God doesn't reject people," reads the tagline. "Neither do we." Would that NBC, CBS, ABC, and Fox could say the same.

Adele M. Stan is the author of the weblog, AddieStan.com and the book, "Debating Sexual Correctness."