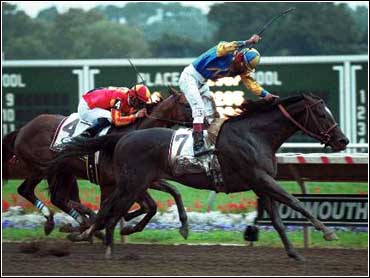 Dixie Union, ridden by Alex Solis, passed favorite Captain Steve down the stretch Sunday to win the Haskell Invitational by three-quarters of a length at Monmouth Park.

Captain Steve took over the lead at the top of the stretch but could not hold off the late charge of Dixie Union, who passed five horses in the final furlong of the 1 1/8-mile race to win in 1:50.

Captain Steve held on for second, followed by Milwaukee Brew in third at the $1 million race before a record crowd of 41,630.

Dixie Union had not run more than 1 1/16 miles in three previous starts - one victory and two second-place finishes - this year.

A promising 2-year old, Dixie Union chipped a knee in the Breeders Cup Juvenile and was held out of competition for six months. Because he came back slowly, plans to run him in any of the triple crown races were scrapped.