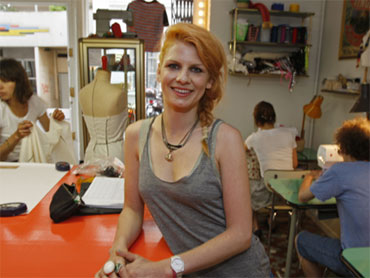 In the realm of haute couture, where seamstresses concoct handmade gowns that cost as much as a car, one atelier has caused a sensation by purveying a different kind of made-to-measure.

The atelier, called the Sweat Shop, is a kind of Internet cafe where Singer sewing machines replace computers, and would-be fashion designers and creatively inclined clotheshorses pay by the hour to stitch their own garments.

The brainchild of a Swiss makeup artist and an Austrian clothing designer, Sweat Shop opened in March, as France was still reeling from global economic crisis and unemployment in the country stood at more than 10 percent.

"It seems like a strange thing to say, but the crisis turned out to be the perfect timing for us," said Martena Duss, the atelier's Lucerne, Swiss-born co-founder. "After years of having this attitude that was all about consumption, people are now about recycling and saving and being creative."

The space itself sets the tone: A dilapidated former printing press in the up-and-coming Canal Saint Martin neighborhood of eastern Paris, Sweat Shop is furnished with found and secondhand objects in what might be dubbed haute kitsch style. A couch set in mustard yellow velvet sits beneath a mounted deer's head; grandma tschotskes and crocheted doilies cover every surface; the white sewing machines, provided free-of-charge by the manufacturer, sit atop refurbished school desks.

It costs 6 euros ($7.90) per hour to use one of the Singers, but some prior sewing experience is required. For novices, Duss and her co-owner, Sissi Holleis, offer sewing classes five evenings a week. Because home economic classes have long been absent from the French public school curriculum, the lessons are Sweat Shop's most popular offerings, Duss said.

Beginners all start with the same simple projects - a pillow or a bag - but after that, clients come with their own fabric and ideas.

"The most frustrating thing for people is that they just don't realize how time consuming it's going to be," said Duss. "They come in here thinking they're going to make a wedding dress in a single afternoon, and it's like, 'Um, no, that's just not possible."'

Both Duss and Holleis learned how to sew in school, and 38-year-old Holleis turned the skill into a profession, designing an eponymous line that she sold in her Paris boutique. After a decade in business, Holleis closed the store in 2008, said 28-year-old Duss, who studied to be a makeup artist and works mostly on fashion shoots and runway shows.

"Sissi is the real professional. I don't sew well, per se, but I do it in my own way," said Duss, who was sporting a rough-hewn gray halter top of her own confection.

In addition to sewing classes, the shop offers knitting lessons, birthday and bachelorette parties and, during the summer, French language immersion-cum-knitting courses. It's also a cafe, serving up potent espressos and homemade cakes.

Sweat Shop has attracted considerable attention from French fashion magazines, and 80 percent of its clientele are women aged 25-35, said Duss, adding that for some reason "there are lots of men in the knitting classes." The shop also attracts a fair share of people passing through Paris, as well as some veteran seamstresses like an 80-year-old Swedish woman who spends nearly every afternoon there.

The shop has already proven a much bigger success than Duss and Holleis initially envisioned.

"We were a bit nervous because there isn't much of a do-it-yourself culture in France," Duss said. "Maybe it's because there's so much perfection all around, with haute couture and haute cuisine, but French people are generally reticent do things that may not be perfect."

"But now, I think people are eager to express themselves and be their own designer and personalize what they wear. They don't all want to be going around in the same H&M T-shirt," she said, adding that she and Holleis have already gotten franchise offers.

"For the moment, we're taking it slow. This is like our baby, so we want it to have time to grow up a little. But we sometimes joke that our goal is to have three stores in three years," she said.

A top destination for the first new branch? Possibly New York, she said.