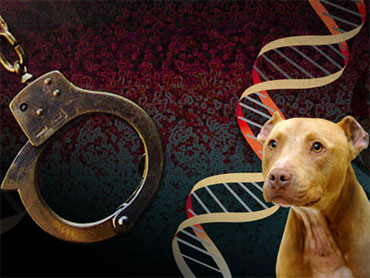 A man who used his dog to attack a teenager whom he then stabbed to death was sentenced Friday to at least 24 years in jail for murder.

Chrisdian Johnson, 22, of southwest London was convicted after police used analysis of DNA from his dog, Tyson, to prove the animal's blood was at the crime scene and on Johnson's clothes - helping place him at the scene.

Prosecutor Brian Altman told jurors that the dogs "were deployed as weapons" in the April attack.

No murder weapon was ever found. However, scientists proved a genetic match between DNA found at the crime scene with the dogs, conclusively linking them to his death.

Johnson was convicted Thursday of Ogunyemi's murder and the attempted murder of another 17-year-old boy who was set upon by dogs and stabbed nine times during the same attack.

On April 27, 2009, police responding to reports of males stabbed in Larkhall Park came across Ogunyemi, who died of his wounds. The autopsy revealed that Ogunyemi, a slight teenager who suffered from Crohn's Disease, had six stab wounds to the abdomen. He also had dog bites on his right calf, thigh and shoulder.

Witnesses to the murder described a group of males with two dogs surrounding Seyi and a 17-year-old friend, attacking them like "a pack of wild animals."

Shortly after the attack police saw a bare-chested man (Crisdian Johnson) covered in blood walking along Wandsworth Road. He was arrested on suspicion of murder. Forensic examinations enabled detectives to identify DNA found on his body and clothing as matching that of both Ogunyemi and the dog, Tyson.

Tyson, who had been stabbed twice during the attack, was taken to a Blue Cross animal hospital for treatment. A trail of blood at the murder scene, found to be dog's blood, was linked to Tyson, who had been chipped and tagged with a serial number, leading police to his owner.

Crisdian's brother, Shane Johnson, 20, who also stood trial for murder, attempted murder and grievous bodily harm with intent, was unanimously found not guilty on all counts.

A blood trail was found leading from the murder scene to Sheldon Court SW8 which forensic analysis showed to be from a dog. Tyson had received two stab wounds during the attack and the trail of his blood was matched to him by canine DNA specialists.

Both dogs were seized and taken into police custody by the MPS specialist dogs unit.

Detective Inspector Mick Norman said after the verdict, "The advances in dog DNA and forensic work now means that anyone who owns a dog and uses it to attack people can be identified and prosecuted."

Police said they would apply for an order to have Tyson put down.