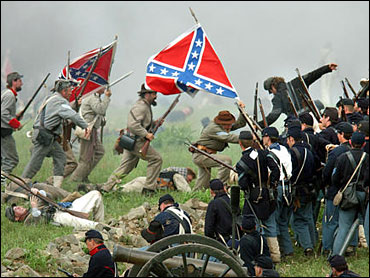 Days before Halloween on a darkened street, Dwight Stoutzenberger aimed his digital camera at a wall not far from where a guide was telling ghost stories to a group of tourists, and came away with photos of possible other-worldly phenomenon, Reuters reports.

Several exposures showed a bright light amid a fuzzy white oval shape apparently hovering near the wall down the street. Tour guide Ann Griffith, who has been doing ghost tours in Gettysburg for 16 years, speculated that it could be an orb; a point of light that she says is commonly seen around haunted sites.

Stoutzenberger, 34, from Elizabethtown in central Pennsylvania, was happy to have found evidence of the spirit world. "I'm a believer," he said. "I go on these tours so that maybe I can catch an orb." The tour was run by Ghosts of Gettysburg, one of about a dozen companies offering such tours of the southern Pennsylvania town. On their website, Ghosts of Gettysburg claims that "Over the years since the battle, stories of scores of sightings, stranger than reality, have emerged from the quaint houses and gentle fields in and around the town of Gettysburg: Stories of sightings of these soldiers, moving again in battlelines, across the fields where they once marched. . . and died; tales of visions through a rip in time into the horrible scene of a Civil War hospital; whispers of a look at men long dead held eternally captive by duty. These apparitions -and more- come back to remind us, in one way or another that they are not to be forgotten for what they did here. . ."

Tour guide Griffith said the Battle of Gettysburg, in which some 7,000 soldiers were killed, explains why modern Gettysburg is populated with the ghosts of those who died horribly, or whose bodies were hurriedly buried in shallow graves during the summer heat. "A lot of them don't know they are dead," she explained. "A lot of them still think they are fighting the biggest battle of their life."

Outside a local elementary school that had been used as a hospital during the Battle of Gettysburg, Griffith provided gruesome details.

"The surgeons would perform amputations without anesthetic, and dispose of the limbs in a wheelbarrow," she said, adding that the arms and legs were probably buried under what is now a parking lot outside the school, possibly explaining why orbs are frequently seen there. The only real evidence of Gettysburg's storied past shown to the tour group was historical, rather than spiritual. About 100 bullet holes marked the spot in the side of the Farnsworth House, where Confederate marksmen shot at Union soldiers who returned fire.