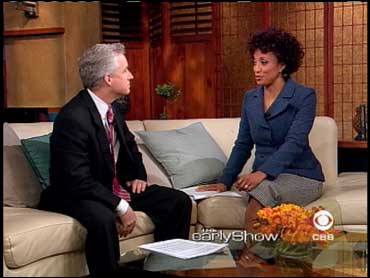 A fresh financial start in the new year should include a plan to protect your family should the worst happen to you.

In a weeklong series called "Do It Now," The Early Show and Money magazine are teaming up and sharing tips to help all of the people who made a very common resolution — to get their financial house in order in 2006.

Today's focus is on something that at least half of Americans don't do, but definitely should. We're talking about creating a will.

When they're not busy beating up on their dad, the Acevedo children dream about the future. For their mom and dad, plans for the future include the not-so-fun possibility of providing for four children if the worst should happen. That begins with making a will.

"It's hard, emotionally, to do it, but we look at it as something that has to be done and we just do it," Candle Acevedo said.

First, the couple outlined their assets and liabilities. Candle is a school teacher and her husband, Ariel, is a New York City policeman. Together they make $115,000 a year.

The couple has a $400,000 mortgage and they pay monthly premiums for two life insurance policies worth $500,000 each. Payments are made to college savings plans for the kids and retirement plans for themselves.

With all that planning for the future, there's not a lot left over for the present.

"We never have any money left over," said Ariel. "I don't even know how we manage, but we're managing."

The hardest part of making a will is naming a guardian to raise the kids and execute the Acevedo's financial wishes.

They chose Candle's mother, but if grandma is unable, Ariel's brother is the backup. The plan is for an unlikely scenario, but that doesn't make it any less necessary or any less scary.

"It was really sad," said Candle. "It made me cry thinking I'm going to die, that I wasn't going to see my kids grow up. Even though I love and trust my mother, I'd really rather do it myself. It was rather hard and heart wrenching, but it's done and now I don't ever have to think about it again."

So now, even with occasional financial stresses, the Acevedo's are free to dream.

"As far as sleeping at night, I think we do. I think we're OK," said Ariel.

"I think you have to give them credit," said Eric Schurenberg, managing editor of Money magazine. "They have a will. They have adequate life insurance. They faced some tough questions, but they've taken care of their family."

Schurenberg says there is a lot at stake if you die without a will.

"If you die without a will, you're basically leaving it up to the state, state probate law, to decide really personal, important questions in your life," he said. "(Decisions) like who is going to take care of your kids? How do you divide up the fruits of your life's work? All that will be decided by the state and that may not be anything like what you intended."

For many who want to create a will, getting started is the hardest part.

"It's really emotional, and often one spouse is willing to grapple with the issue and the other is reluctant," said Schurenberg. "So what you can do is try to take the emotion out of it. Don't make a direct approach to your spouse if he or she is reluctant to talk about. Bring up another person's situation, a colleague, someone at work who is having a hard time settling an estate and segue from there to say if we planned we can avoid that kind of problem ourselves."

There are several big things that you have to outline when you're putting a will together. The first one is choosing a guardian if you have young children.

Schurenberg says that is another tough area, so try to take the emotion out of it. Each spouse should start by making their own list of who they would want to take care of the children.

"Anyone who doesn't make both lists is off the list altogether," said Schurenberg. "Then start to go through the people who are still remaining and ask questions like do they share our values? How old are they? Our kids are teenagers and is this person going to have the energy to raise them?"

You have to talk about your assets and dividing those up. Where does the money go?

"Where the dollars go isn't really that hard," Schurenberg said. "What covers a lot of problems in families is where the stuff goes. The stuff that has a lot of emotional value attached to it, like mom's jewelry or dad's baseball card collection. What you ought to do is add a letter to your will that says who gets this stuff and why."

If you have a complicated estate, for example, if you have more than $2 million in assets including your house, which means you'd be subject to estate tax, Schurenberg says hire a lawyer. Otherwise, you can go on the Internet and download a program.

It is important to update your will every five years, at least.

What about insurance? The Acevedoes carry a combined $1 million in insurance.

"They were doing a good job on that," Schurenberg said. "Generally, life insurance five to 10 times your annual incomes is the rule of thumb. Another kind of insurance you need to get is disability insurance. You're more likely to be disabled during your working life than die. Get a disability policy that will replace income if you do it."

On Friday, find out how to indulge a little without hurting your other financial goals.