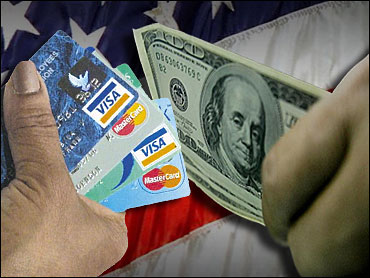 When it comes to New Year's resolutions, so many people want to improve their financial situations. All this week, The Early Show has teamed up with Money Magazine to help tackle your financial goals of 2006.

One of the most common resolutions is to stop supporting the credit card industry and get out of debt. That's exactly what Joseph and Joann Cascio want to do.

"It's too much debt for me to feel comfortable with, I would like it to be less," Joann said.

In 2001, the Cascio's income dropped drastically.

Joseph joined a start-up company, taking a $50,000 pay cut. Now, with a son in college and two little girls to support, their credit card debt has been creeping higher and higher.

"Because of the charging for Christmas and holidays and all that kind of stuff, the charge card that we pay off every month happened to be extremely high," Joseph said.

"We're putting more and more on these mileage charge cards that we get the miles for which I think has to stop, and we're moving that to other charge cards with the balance transfer deal," Joseph said. "It's kind of getting, in my perspective, it's too much."

The debt does not let them add to their kid's college funds or their own retirement plans.

"I don't know where we're going to cut and what we can do," Joann said.

"We don't go out a lot to eat. We don't do anything for ourselves," said Joseph. "We do want to get rid of the zero percent cards and save some more money, but how do you do that when you're worried 'do we have enough money to spend to pay the bills?'"

He says one thing the Cascio's are doing right is that they've transferred all of their debt to cards that have a zero percent interest rate. That alleviates some the pressure because they're not paying any exorbitant interest rates on those balances.

For them, the most important thing they need to do is to stop charging everything on that card that earns them miles. Schurenber says it's too easy to spend more when your just charging it. If they're paying for things in cash or using debit cards, they're going to spend less because cash hurts.

While they may be earning miles on their credit cards, odds are the couple is spending a lot more than they would if they just paid for those airline tickets. Good deals are available online.

Once they stop spending so much on that card, and the bill is much less every month, they're going to be able to start paying off the zero percent cards, get out of debt, and start saving.

Here are some steps we can all use to help work our way out of credit card debt:

You don't have to literally cut up your credit cards, but you must stop using them routinely if you're serious about paying off your balances.