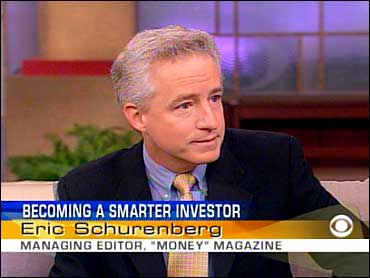 With the arrival of a New Year, many of us are committed to getting our financial lives in order. So we're teaming up with Money Magazine for a weeklong series we're calling "Do It Now." Today, we're talking investments.

Tom and Denise Donofrio are hoping their late start on investing won't keep them from reaching their goals of a comfortable life in retirement and saving money for their children's college educations.

"Since we've been married, one of us was always in school," Denise said. "Now, I guess, we're both at a point where we're making more money so now we have some money to invest."

The Donofrios are about to celebrate their tenth wedding anniversary, but for the very first time, they are getting serious about investing

"With buying the house, the mortgage and Victoria coming and paying off the student loans, it never really gave us the opportunity to save for retirement," Tom said. "I think a lot of what we tried to do was pay off debt rather than put money into retirement."

So with their debt payments under control, the Donofrios are shifting their financial focus to their children and their retirement.

"We're actually adopting another child, so we'll have two for college. I guess I'm more concerned about their welfare with college than our own," Tom said.

But as any family new to investing will tell you, it can be quite a challenge. The couple is trying to figure out how much to allocate into investments for retirement and how much they can use in the short term for college and home renovations.

Tom says, "I think we're both in the same feeling that whatever sacrifice we need to do we'll be willing to do it."

"I think they're doing smart things," he said. "First, they're learning about investing. Anyone can get the basic principles and once you do you can make better decisions about your money. The second thing is they're asking the right questions. They didn't ask 'What are the hot stocks or mutual funds of the next year?' That's a way to lose a lot of money on a wild goose chase. Instead, they're asking about asset allocation, 'How do I divide up the money I have against different assets so I get the right balance between risk and return?'"

Once you have your debt under control, that's when you can start addressing the idea of saving money for the future.

The couple's goals are saving money for college, retirement and home improvement.
Schurenberg says saving for retirements should be a priority.

"The kids can get a loan to go through college. No one is going to lend you money to see you through retirement," Schurenberg said.

Allocation is the key decision about investing. It means how to divide money between stocks, which are riskier, but offer higher returns and fixed- income returns, like bonds, which are safer but have less upside.

"When you buy stock in a company, you are literally and legally a part owner of that company. So you do well if the company does well. There's more upside, but there's also more risk," Schurenberg said.

How does a future investor know how much of one or the other to get?
Ask yourself some questions.

What you basically want to find out is are you conservative, in which case, you should have more bonds or are you aggressive?

If you are somewhere in between, ask yourself how long is it until I reach my goal? If it's a long way off, you can take more risk -- more stocks. If it's near term, then more bonds.

There's a simple formula to help you know what you need:

Once you made these decisions, you really need to track it. This is not one where you put it on the table and let it ride.

"It's not a one-decision thing, because over time, your allocations get out of whack from the rise and fall of the markets. Once a year -- July 4th, Groundhog's Day, Sadie Hawkins Day -- it doesn't matter. Once a year, look at your investments and put everything back in order by selling the stuff that's gone up and buying stuff that's gone down. It's a way to force yourself to buy low and sell high. That's the way to make money as an investor," said Schurenberg.

On Wednesday, Schurenberg has tips on how to save some of the money you earn.