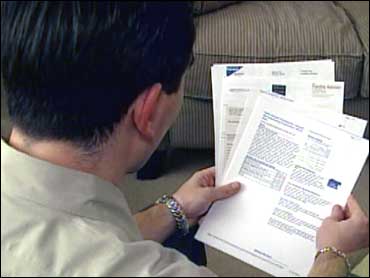 Now that 2006 has arrived, many people want to improve their financial situation.

In a weeklong series, The Early Show is teaming up with Money magazine for a special series called "Do It Now."

A Money magazine poll finds a third of the magazine's readers said their top goal in 2006 is to save money. It's also a challenge for many families.

Energetic twin girls keep Heather and Robert Christopher's hands full. They're doing a good job meeting expenses, but they feel their bankbook is a little empty.

"It's the little things with the kids that really get your money," Heather said. "You need to buy diapers and wipes and pacifiers and sippy cups."

About 10 percent of their salaries automatically go into retirement plans and they're building a modest 529 college fund for Hannah and Kayla.

"We opened up a 529 before the girls were born, in my name, and we put in that every month," Heather said.

Some might be envious of their position — twenty-something's with no credit card debt; homeowners looking to upgrade.

"Eventually, I'm hoping to move into a new home then maybe have another baby and be able to pay for their college educations," Heather said. "That's really my ultimate financial goal."

But the couple is not quite sure how to reach those goals.

"It's so hard to guess college costs now, especially having two that are probably going to be in school at the exact same time," Robert said.

"To put aside some money, even if it's as small as $100 a month that we don't see, so that we don't miss it," Heather said. "All in all, this is like our year to try to get ourselves together."

Eric Schurenberg, the managing editor of Money magazine, says the couple is off to a great start, but there is more they can do.

"It's important that they started so young," he said. "When you start that young, it gives you that much more time for your savings to snowball, to compound, as it's called. And that is the best ally you can have for reaching your financial goals."

The couple is not maxing out their 401(k). It's something Schurenberg says we should absolutely do.

"Most companies let you put in 15 percent and they're putting in 10 percent," he said. "Because 401(k)s are such a great deal, if you're not taking at least maximum advantage, you're missing a bet. Until you take money out of it, you don't pay tax on the money or interest on the money earned. Ideologically, it's the easiest to save because it comes out of your paycheck."

The other thing, Schurenberg says, is that many companies will match your savings, kick in 50 cents say for every dollar you save. He says if you don't take advantage of that, it's like turning down part of your paycheck.

"Go to a bank, a mutual fund company or brokerage and open up an IRA or Roth IRA, or if self-employed, an SEP IRA," Schurenberg says. "You can set it up so that you save automatically just as you do in a 401(k)."

It's important to not think of contributing to your 401(k) as giving up a big chunk of money because that can be daunting.

"Look at the Christophers," Schurenberg says. "They're putting $50 a month into the college savings plan. Next month they can put in $55. And in the spring they can start putting in $60. They're not going to miss an extra $5 a month. Yet, they're allowing that extra savings to snowball."

Don't make savings an act of self denial or willpower.

"Take your will out of it," Schurenberg says. "Call your bank or brokerage or mutual fund company and say 'I want to put "x" dollar amounts into savings every month.' You make one decision, it happens automatically, on auto pilot, you don't think about it."

Getting started on saving is key.

"You're not going to be independently wealthy on (saving) $10 a week, but you get started. Then you take the baby steps and start to build," Schurenberg says.

On Thursday, tips on how to protect your family when disaster strikes.