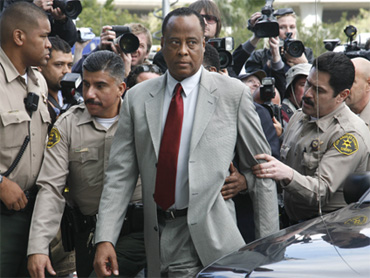 As Michael Jackson was rushed to UCLA Medical Center on June 25, paramedics couldn't revive him, but there are new claims that emergency room doctors were able to restart Jackson's heart and restore a faint pulse for several minutes, reports CBS News Correspondent Bill Whitaker.

"There were reports that he had a heartbeat, and that's true," says Brian Oxman, a lawyer for the Gloved One's father, Joe Jackson, "but the problem was Michael was long gone."

Among the claims -- just hours before giving Michael Jackson the powerful anesthetic propofol, Murray was seen in a club -- drinking.

"He was having alcoholic beverages," Oxman contends, "the extent of it we do not know, but I can tell you for sure it's not something you want your doctor to be doing."

Murray told investigators he didn't give Jackson anything that "should have killed him." and Murray has pled not guilty to one count of involuntary manslaughter.

"This is not really an effort to get monetary compensation," Oxman says. "Joe Jackson is looking for justice."

Murray has 90 days to respond to Joe Jackson's complaint.