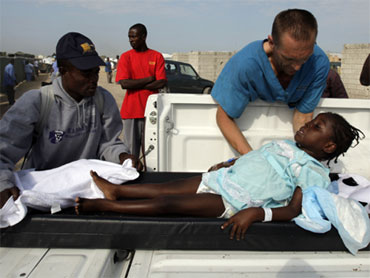 Doctors skirted a bureaucratic logjam to save the lives of three critically-ill child victims of Haiti's earthquake on Sunday, flying them to U.S. hospitals on a private jet to avoid .

A 5-year-old tetanus victim, a 14-month-old boy critically ill with pneumonia and a baby with third-degree burns were sent to Children's Hospital of Philadelphia by the aid group Partners in Health, based in Boston.

The airlift had been in doubt after the U.S. military stopped medical evacuation flights on Wednesday night because of because of an apparent dispute over where seriously injured patients should be taken for treatment.

"This is a good day. These are three children who would have died if they had stayed here," said Luis Ivers, Partners in Health's clinical director in Haiti. "It's the little successes like that that keep us going here."

Five-year-old Betina Joseph, who developed tetanus from a small cut on her thigh, was in danger of dying if she could not reach a respirator at a U.S. hospital, said Dr. Barth Green, chairman of the University of Miami's Global Institute for Community Health and Development.

"We have 100 critically ill patients who will die in the next day or two if we don't Medevac them," Green said Friday.

Meanwhile, the U.N.'s World Food Program began distributing food directly to women on Sunday, largely avoiding the violent jostling that has disrupted aid since the earthquake.

The U.N. and partners handed out 55-pound bags of rice at 14 sites and plan to continue the system daily for the next two weeks.

Also getting aid were elderly and disabled people and some men, who were allowed into line if women in their household were unable to come.

Young men often have forced their way to the front of aid delivery lines or steal from it from others, meaning aid doesn't reach the neediest at rough-and-tumble distribution centers, according to aid groups.

Both federal and state officials appeared to distance themselves from the decision to suspend the military's medical evacuation flights.

White House officials said they were working to increase hospital capacity in Haiti and aboard the USNS Comfort hospital ship as well as in the United States.

Col. Rick Kaiser said Sunday that the U.S. Army Corps of Engineers has been asked to build a 250-bed tent hospital to relieve pressures on the Comfort and on Haitian facilities where earthquake victims are being treated under tarpaulins in hospital grounds.

Several Port-au-Prince hospitals were damaged or destroyed in the Jan. 12 earthquake.

U.S. Ambassador to Haiti Kenneth Merten said about 435 earthquake victims had been evacuated before the suspension, and that he was "sure the Department of Defense wants to do the right thing."

Florida Gov. Charlie Crist told ABC News' Good Morning America on Sunday he was puzzled by the reported suspension. He said 700 people had come from Haiti to Florida over the past 24 hours and said the state was still willing to help emergency cases.

"It's all-hands-on-deck here in the Sunshine State. We're welcoming Haitians with open arms and probably done more than any other state and happy to continue to do so," Crist said. 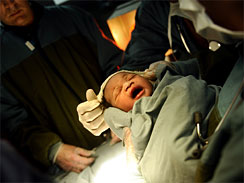 • Medical personnel aboard the multi-purpose amphibious assault ship USS Bataan delivered a newborn baby on Saturday, Jan. 30, 2010 in the ship's operating room, in Baie de Grand Goave, Haiti. The boy was the first baby ever born aboard the Bataan, which is supporting Operation Unified Response.

• Ten Americans were detained by Haitian police on Saturday as they tried to bus 33 children across the border into the Dominican Republic, allegedly without proper documents. The Baptist church members from Idaho called it a "Haitian Orphan Rescue Mission" to save abandoned children in the disaster zone. But the Americans - the first known to be detained since the earthquake - put themselves in the middle of a political firestorm over fears that children are falling prey to child trafficking. A Monday hearing before a judge was scheduled.
By Associated Press Writers Frank Bajak and Paisley Dodds; AP writers Evens Sanon, Michelle Faul and Ben Fox contributed to this report