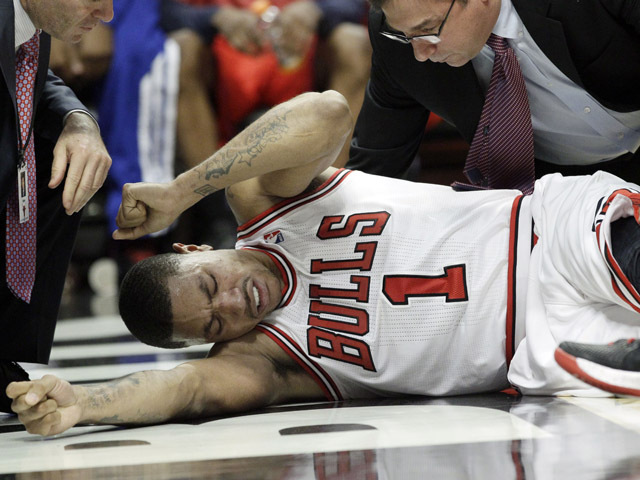 (CBS/AP) CHICAGO - Chicago Bulls star Derrick Rose faces a recovery of eight months to a year in his recovery from knee surgery.

The assessment by Dr. Brian Cole on Tuesday means the star point guard could return around Feb. 1 or miss next season. The doctor adds there is a chance Rose could be back sooner, but "we're not going to rush it."

The Bulls had already said Rose has a torn ligament in his left knee. Cole says there is there is also a small cartilage tear. He says Rose is "doing great" and surgery went "extremely well."

Rose, last season's MVP, was hurt in the final minutes of Chicago's Game 1 victory over Philadelphia in the first round of the playoffs. After Rose went down, the Bulls lost four of the next five games and lost the series.

Bulls general manager Gar Forman said Rose's previous injuries or the compressed schedule did not lead to the ACL tear. But players don't seem so certain.

"There's a lot of speculation. And it doesn't matter. We're in this season, we played the games, we're in the playoffs now. Hopefully no one else goes down with these type of injuries," Miami's Dwyane Wade said last month. "It's not anything that we want to see for none of our players to go down with injuries. So you don't know. You don't know if it was because of the condensed season. You don't know what the case may be. The biggest thing is that them guys get healthy."