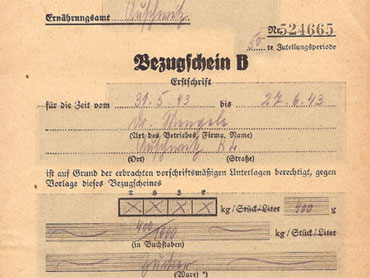 Food coupons for some of the notorious Nazi doctors at the Auschwitz death camp - including perhaps the sadistic Dr. Joseph Mengele - have been found in the attic of a nearby house, where they had lain unseen for decades.

Also found in the attic were other documents relating to the lives of Nazi officials, including death certificates and a map.

Some sugar coupons bear the names of Horst Fischer and Fritz Klein, doctors who were executed for their crimes after the war, Adam Cyra, a historian at the Auschwitz memorial museum who is looking through the documents, said Monday.

"The sensational value of this discovery is in the fact that these original documents, bearing the names of main murderers from Auschwitz, were found so many years after the war," Cyra said.

Cyra said he believes a June 1943 coupon for a small amount of sugar probably was assigned to Dr. Joseph Mengele, who was infamous for his sadistic experiments, but the writing is unclear.

A February 1944 coupon for 0.28 kilograms of butter is made out for a Dr. Mergerle. There was no SS doctor by that name at camp, so Cyra believes a clerk misspelled Mengele's name.

Doctors and pharmacists at the camp conducted pseudo-medical experiments on the inmates and helped select Jews arriving at the camp for either labor or death. Mengele escaped after World War II and evaded capture for the rest of his life.

The documents - almost 300 in total - were found in the attic of a house being renovated in the town of Oswiecim, where the Nazis built the Auschwitz-Birkenau camp.

The homeowner, who has requested anonymity, made them available to historians at the Auschwitz museum on Friday, museum officials said. They believe the house was used by an SS officer during the war, but it is not clear which one.

Historians have checked through some of the documents but have more to pore over, museum spokesman Pawel Sawicki said.

The material does not document crimes committed at the camp.

The documents include a German-language map of the area around Oswiecim and a death certificate for Adolf Kroemer, a pharmacist at Auschwitz, saying he died of a heart attack in February 1944.

Between 1940 and 1945 more than 1 million people, mostly Jews, were killed in the gas chambers at Auschwitz or died of starvation or disease while forced to perform hard labor at the camp.