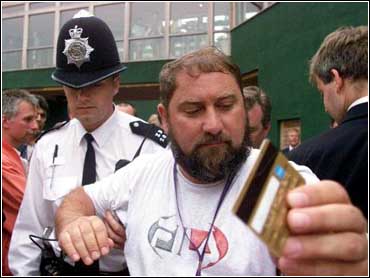 An argument over the price of lunch led to Jelena Dokic's father being removed from the grounds of the U.S. Open on Wednesday.

Damir Dokic complained loudly in the players' lounge when he was charged $10 for a piece of salmon. He grew increasingly abusive, according to USTA officials and was escorted from the National Tennis Center.

In a statement, Jay Snyder, tournament director of the Open, said Dokic would not be permitted back for the remainder of the Grand Slam event.

"Damir Dokic, the father of Jelena Dokic, was removed from the grounds as a result of abusive behavior in the player lounge earlier today," Snyder's statement said. "He will not be allowed back on the grounds for the remainder of the U.S. Open. The Sanex WTA Tour was consulted and fully supports the decision."

The episode was the latest in a string of Grand Slam confrontations involving Dokic, whose 17-year-old daughter was a semifinalist at Wimbledon this year and won her first-round match in the Open on Tuesday against Anna Smashnova.

At Wimbledon, he was detained by police after smashing a reporter's cell phone following a rambling interview in which he declared "The Queen is on the side of democracy and the rest of the country is fascist." He also gestured obscenely at an American female reporter while making derogatory comments about President Clinton.

In January, he accused officials of rigging draws against his daughter and threatened briefly to pull her off the Australian Olympic team. Jelena Dokic, who lives in Sydney, has threatened to boycott the games unless she is allowed to live at home, wear her sponsor's clothing instead of the team uniform and has her father accredited as her coach.

In 1999, Dokic was ejected from a tournament in Birmingham, England, after calling match officials "Nazis." He later went into the street outside the club, blocked traffic and jumped on the hood of a car and was arrested.

In an interview with the Daily News on Tuesday, Dokic defended his behavior.

According to eyewitnesses Wednesday, Dokic got into an argument with server Mattie Jones, who has been working at the Open since 1988. She said he objected to the size of his portion ad called her a cow.

"I called my manager," Jones said. "I wasn't going to be disrespected by anybody. He was so arrogant, so nasty, I didn't want to serve him."

Pete Pistone, director of security for the Open, ordered Dokic to leave pushing him out the doors of the lounge and off the grounds. Dokic called Pistone a fascist and cursed at officials of the WTA Tour.

Jelena Dokic followed her father out and was crying. Moments later, the Dokics returned. The father was pushed out again, put into an Open transportation vehicle and ordered off the grounds. Pistone threatened to have him arrested and as the vehicle drove off, Dokic waved out the window.