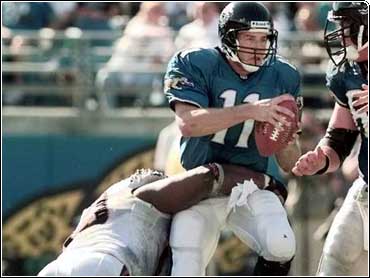 Jay Fiedler, who was competing with Huard for the starting job, required arthroscopic hip surgery Thursday night for an injury that has bothered him since training camp began. He's expected to be sidelined until late in the preseason or early in the regular season, which starts Sept. 3.

The unexpected development makes Huard the starter as the Dolphins head into their first season without Dan Marino since 1982.

"This is one less question you won't have to ask me every press conference," coach Dave Wannstedt quipped to reporters. "This was a total shock to all of us. But, hey, better now than the second game of the season."

Huard, who led Miami to a 5-1 record when Marino was sidelined last season, had a slight edge over Fiedler after three weeks of training camp. Huard, 27, was already slated to start the first exhibition game Saturday at Pittsburgh.

Fiedler underwent an MRI late Wednesday, which indicated surgery was needed to repair a tear in his hip joint. He had been bothered earlier this summer by a sore back and continued to practice even after his hip began to hurt a week ago.

"It's unclear to tell whether this injury was related to his earlier back pain," trainer Kevin O'Neill said.

Fieldler, 28, backed up Mark Brunell last year for the Jacksonville Jaguars, then signed a three-year, $3.8 million contract with the Dolphins in February.

"I'm glad that the injury is not a serious one," Fiedler said in a statement. "I'm looking forward to a quick recovery and getting back on the field as soon as medically possible."

Wannstedt said he hopes Fiedler can play in the final preseason game Aug. 25. But for now the job belongs to Huard, who broke into the NFL as an undrafted free agent and has been with the Dolphins since 1997 but never started until last year when Marino was hurt.

"Regardless, there's pressure ... that's the nature of the business," he said. "It's unfortunate for Jay, and I wish him a quick recovery."

Huard will play the first half aturday against the Steelers. The other quarterbacks on the roster are Jim Druckenmiller, who becomes the backup, and Mike Quinn.

"This is not a panic situation," Wannstedt said. "This is just a little curve in the road that we have to deal with."