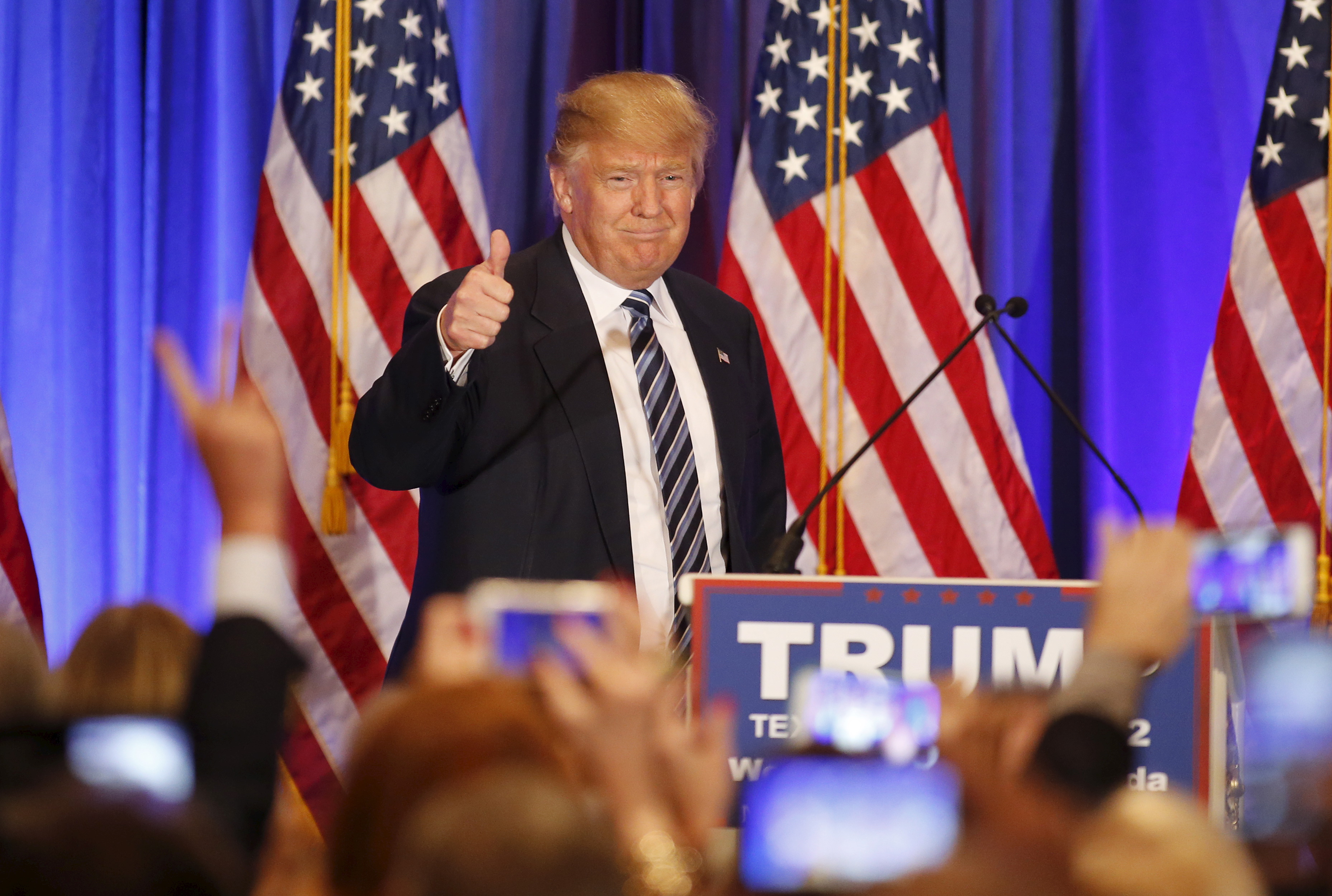 Donald Trump and Ted Cruz split the contests Saturday, with Cruz winning Kansas and Maine caucuses, and Trump taking Kentucky's caucuses and the Louisiana primary. Marco Rubio failed to place even second in any of the four GOP contests.

At one Trump International Golf Club, in West Palm Beach, the billionaire dismissed his losses in Maine and Kansas.

"We really didn't spend very much time. We spent two hours in one place and two and a half in the other....And I want to congratulate Ted on Maine and on Kansas," Trump said graciously. Then he continued, "He should do well in Maine. Because it's very close to Canada," referring to the fact that Cruz was born in Canada.

Rubio, Trump observed, had a "very, very bad night," and he said that he was ready to take Cruz on one-on-one.

"Personally, I'd call for [Rubio] to drop out of the race," Trump said.

Trump later proceeded to take questions in an awkward news conference, held in the ballroom of the golf club. Reporters were set apart from Trump by seven rows of invited guests seated in front of them. Journalists essentially had to stand and shout questions from the back of the room, while the guests would cheer or jeer them.

Trump refused to give his position on same sex marriage, even when asked by a reporter multiple times.

"Well, I've made it very, very strong," Trump said testily. "We have policy on it and I've said it very, very strongly. And I think you know it. And it's all done. How many times do I have to say it? It's like as an example, what is my position on 900 different things? I've said it a hundred and fifty times. We're not here for discussing that, but everyone knows how I feel on it."

Then Trump told the reporter to "sit down," an order he repeated a few times to others during the news conference.

Trump has held more than one position on gay marriage. After the Supreme Court decision came down legalizing it, Trump said to MSNBC, "You have to go with it. The decision has been made and that is the law of the land." But more recently, Trump said to Fox that he would "strongly consider" appointing judges to the bench who would overturn the decision.

The event had the feel of a happy hour for the one-percenters. The guests -- a mixture of wealthy Mar-a-Lago residents and other friends of the billionare -- sipped drinks and nibbled hors d'oeuvres -- tiny lamb chops and Beef Wellington on shiny silver platters brought around by wait staff. It made for a strange contrast with the media present.

One guest said that she had heard about the press conference Saturday morning by the pool, as she was getting a manicure and pedicure at Mar-a-Lago, Trump's private Palm Beach club. She had been invited by the club's manager.

At one point, a reporter asked about Trump referencing his private parts earlier this week at the Fox News debate in Michigan. The crowd booed, and Trump egged them on.

"This is the problem with reporters. Look, look," Trump said amid the jeering. "Just so you understand, not me. Somebody else. Marco brought it up. Do you notice? You look at what happens to Marco. I didn't tell bring it up. Excuse me. Somebody else said Donald Trump has small hands....These guys know I hit a ball 280 yards."

Outside the ballroom, two statues of knights, which looked like they were made of cast iron, knelt outside a fireplace. In a hallway adjacent to the knights, there was a display case of sports memorabilia -- famous athletes professing adoration for Trump: one helmet was from a former NFL quarterback, saying "We love Mr. Trump, Tim Tebow."

The press conference came hours after Trump seemed to alter his position on torture. A day after issuing a statement saying that he "will not order our military or other officials to violate those laws and will seek their advice on such matters," referring to torture or targeting family members of suspected terrorists, Trump said laws concerning waterboarding would be "broadened."

"We're like a bunch of babies, but, we're going to stay within the laws, but you know what we're going to do?" Trump said. "We're going to have those laws broadened, because we're playing with two sets of rules. Their rules and our rules."

When asked at the West Palm presser what he meant by that, Trump declined to specify.

"I will try and get the laws extended," Trump said. When pressed, Trump told her to sit down.

"I want to stay within the laws. And right now we have the laws," Trump went on, ignoring the reporter. "But I want to make those laws stronger so that we can better compete with a vicious group of animals. Okay?"

A reporter asked whether Trump thought the discourse should be on a higher level in the campaign.

Trump answered, "I will be the most presidential candidate in history -- other than Abe Lincoln, he was tough to beat. Okay?"