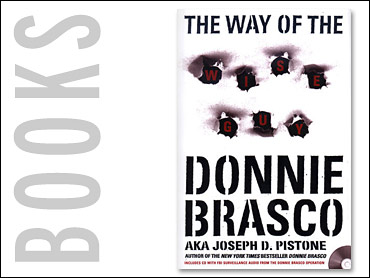 After his six-year stint as an FBI undercover inside the Bonanno crime family, agent Joe Pistone - you know him better as "Donnie Brasco" - had enough stories to fill a best-selling book.

One problem: A single book couldn't hold all his tales.

In "The Way of the Wiseguy," Pistone takes a whack at rectifying things. The law enforcement veteran recounts anecdotes about life among the mob's made men, ranging from the etiquette of murder (a pair of .22-caliber bullets behind the ear) to the etiquette of dinner (wise guys never pick up the check).

"I do a lot of lecturing, at colleges and police schools, and I always get the same questions: 'Do they really kill you? What do they do with the money? How do you become a wiseguy?"' Pistone said in a recent interview.

"I thought this might be a good how-to book, informative about wiseguys," Pistone continued, his clipped inflections echoing those of a mobster. "So I put together each heading, and wrote what I knew about it."

Pistone knows better than most. He became an FBI undercover agent in 1969, quickly working his way up the law enforcement ladder.

His greatest performance, re-created on screen in 1997 by Johnny Depp, came as Donnie Brasco - a putative jewel thief who threw in with the Bonanno family in 1976. Pistone was so convincing that he was almost inducted into the family.

Pistone spent six years with the Bonannos, eventually putting more than 120 mobsters in jail. Two of Pistone's Mafia pals were executed by the mob once his true affiliation became public.

So when Pistone provides a list of things that will provoke a mob hit, it's worth noting: Do not testify before a grand jury. Do not lay hands on another wiseguy. Do not mess with a wiseguy's wife, or girlfriend, or daughter or any other female relative.

An example: There was a card game where one "degenerate gambler" bet his wife's sexual favors - and lost. Although the wife paid off, her brother was mob-connected - and she was soon single again.

"Unless you are absolutely positive that your wife has no connection to the Mafia, even three or four times removed, do yourself a favor and do not bet her in a poker hand," Pistone writes.

Don't expect to find such advice from Miss Manners.

Pistone's recounting of the ins and outs of mob nicknames hits the perfect tone about the murderous Mafiosi and their aliases.

"Say what you want about wiseguys," this chapter begins, "they got the best nicknames in the business."

Like Bobby Badheart, who had a pacemaker. Or Mike the Hat, a man who loved his headgear. Particularly colorful mobsters, such as Bonanno underboss Nicky Marangello, sported multiple nicknames: Nicky Cigars, Nicky Glasses or Little Nicky.

Think a small, bespectacled guy with a taste for tobacco.

"With wiseguys, you don't know a guy by his name, only by his nickname," Pistone said. "You never asked a guy for his last name."

Pistone, who posed as a jewelry thief, had his own alias: Donnie the Jeweler. Not quite "The Chin" or "The Dapper Don," but you generally don't get to pick your own nickname, either.

Although Pistone's beat these days is the lecture circuit and movie production, he still keeps a very low public profile. Back in the early 1980s, the mob put a reported $500,000 bounty on his head.

Even today, more than 20 years after he exited the Bonannos, Pistone travels under assumed names, refuses to be photographed and does television interviews in disguise.

He's also turned down offers from publishers seeking a Brasco sequel, picking up the story from when Pistone walked away from the Bonannos in 1981.

"A lot of it then gets into personal stuff," Pistone said. "That's why I'm a little hesitant. I left a lot of personal stuff out of 'Donnie Brasco.'"

He's more forthcoming in his grudging admiration for old school Mafiosi, like his late capo, Dominick "Sonny Black" Napolitano. Sonny was marked for death once Pistone's true identity became known, and he knew it. Standup to the end, Napolitano never flinched when summoned to the meeting that was undoubtedly his last. He stopped for a drink with a bartender friend, surrendered some personal effects and was never seen again.

"How many guys are going to do that?" Pistone asked of the current generation of mobsters. "How many? None of these young guys."

In contrast, Pistone offered the story of a young mob wannabe who earned his nickname from federal officials rather than his goombahs.

"He was nicknamed "Eight Minutes,"' Pistone said. "Because by the time he sat down with the FBI and found out who we were, it took just eight minutes until he flipped and was on our side."