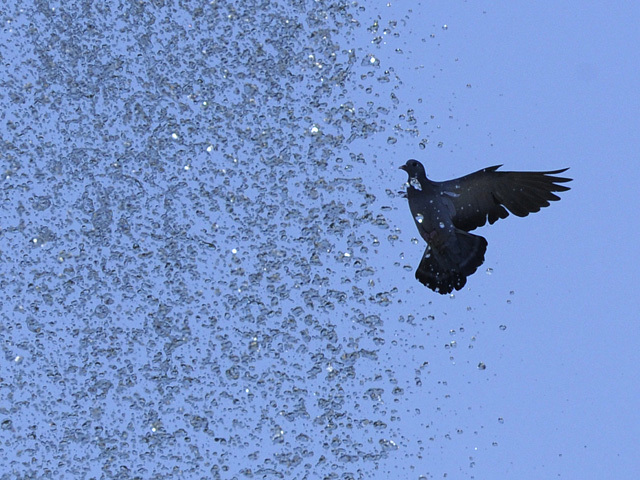 If you shoo a pigeon, that bird is likely to remember you and know to stay out of your way the next time you cross paths, according to a new study. Researchers found that wild, untrained pigeons can recognize individual people's faces and are not fooled by a change of clothes.

Previous research in this arena had only focused on the perception abilities of pigeons that were trained in a lab environment, but the new study was conducted on untrained feral pigeons. At a park in Paris, two researchers of similar build and skin color, but wearing different-colored lab coats, fed a group of pigeons.

One researcher ignored the pigeons after feeding them, allowing them to eat the food, while the other was hostile and chased them away. This was followed by a second session when neither researcher chased away the pigeons.

"It is very likely that the pigeons recognized the researchers by their faces, since the individuals were both female and of a similar age, build and skin color," study researcher Dalila Bovet of the University of Paris Ouest Nanterre La Défense said in a statement.

"Interestingly, the pigeons, without training, spontaneously used the most relevant characteristics of the individuals (probably facial traits), instead of the lab coats that covered 90 percent of the body," Bovet added.

The researchers noted that the birds appear to be able to differentiate between humans and are aware that clothing color is not a good way to tell humans apart. They theorize that this recognition ability may have come about over the long period of association with humans, from early domestication to many years of living in cities.

Previous research supports the findings, as the memory and recognition skills of certain bird species have been demonstrated by other studies. In May 2011, Seoul National University researcher Won Young Lee noticed that when he returned to an area where he had previously installed cameras into the nests of magpies, the birds recognized his face and began dive-bombing him.

A 2009 study showed that jackdaws, which are the smaller cousins of crows and ravens, can interpret human eye cues and even follow human gestures such as pointing. University of Oxford researchers noted that hand-raised jackdaws could find food when a familiar person's eyes looked back and forth from the food to the bird. The birds also responded when the person pointed to the food's location. However, the jackdaws took longer to approach food when an unfamiliar person was watching.

"I think they can generalize to human eyes somehow, and interpret human eyes as eyes," said Auguste Bayern, a cognitive biologist at the University of Oxford and lead author of the 2009 study.