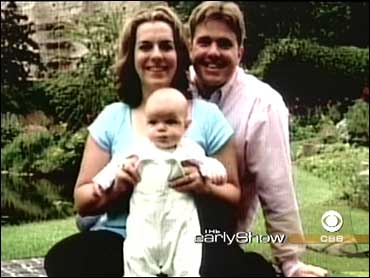 Police west of Boston are dealing with an international murder mystery.

They are trying to track down a British man, Neil Entwistle, who has not been seen since his wife and their baby were shot to death.

reported
on The Early Show that Rachel Entwistle, 27, and her 9-month-old daughter, Lillian, were found dead in their home Sunday.

And while police will not call Neil Entwistle, 27, a suspect in the case, he is wanted for questioning. Rea says Entwistle has spoken to police, but from somewhere outside the United States.

Sunday night, police were called to the Entwistle home in Hopkinton by friends and relatives who had not heard from the family since last Thursday.

When officers looked around, they made a grisly discovery.

"When police did enter, they discovered upstairs on a bed, in bedding and almost not visible, in fact, to anybody, the bodies of Rachel Entwistle and her daughter, 9-month-old Lillian Entwistle," said Martha Coakley, Middlesex County district attorney.

Rea reports that the family had planned a dinner party for last Saturday night. When guests arrived, no one answered the doorbell.

"We believe, subject to the autopsy report, that they were the victim of probably a small caliber gunshot and it may just have been one through both the mother and the child given their locations on the bed," said Coakley.

When officers first found the bodies, they thought that they might have been the victims of carbon monoxide poisoning.

Coakley said there was no obvious blood on the bed where they were found, and they were fully clothed and tucked beneath the covers in the master bedroom.

It was not until medical technicians found the bullet wounds in the torso of both mother and child that police suspected foul play, according to investigators. It was not immediately determined how long they had been dead.

Coakley said Neil Entwistle has been out of town since at least Friday and may be driving a BMW.

When officers arrived at the Entwistle home on Sunday night, the doors were locked and there were no signs of forced entry, police said, leading investigators to believe that the killings were not random.