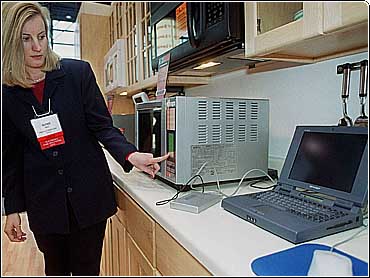 Spending too much time in the kitchen?

Manufacturers at the International Housewares Show think they have a solution linking microwave ovens to the Internet for an easier cooking experience.

Sharp Electronics Corp. has developed a convection microwave oven that can download recipes from the company's Web site. The microwave then gives step-by-step instructions on preparing the meal, and automatically sets the time, adjusts the power and does the roasting, baking, broiling or grilling.

Samsung is developing a microwave that reads directions on pre-packaged food when the package's bar code is swiped across a special sensor.

The oven, being developed with Rutgers University researchers, will then contact the manufacturers' Internet site, read the directions and cook the meal even taking care of any necessary turning while you do something else.

Putting cyberspace in the kitchen will simplify people's lives by reducing the amount of time they must spend preparing meals, said Sharp product development manager Joy Weis Daniel, demonstrating the new oven at the trade show, which opened Sunday in Chicago,

"It does all the thinking," she said.

Still, why swipe a bar code, for example, when you can just read the package directions?

Rutgers University researcher Kit Yam, who's helping develop the technology, gives soggy fish sticks as an example. Directions currently can't be tailored to every microwave. If they're not right for the oven you're using, you end up with food that has poor consistency and bad taste, he said.

But Kota Chang, who was checking out new products for a Pasadena, Calif., appliance manufacturer, thinks there is another reason.

"I just think people are getting more and more lazy," he said, adding that Americans are ready to take the next step in microwave technology.

The Sharp microwave requires a separate PC that can be in any room. The recipe is downloaded into a data box, which is then connected to the microwave. Customers could only download recipes from the Sharp Web site.

Neither microwave is yet available to U.S. consumers. Sharp began selling its product in Japan in October and hopes to introduce it in the U.S. in the next year or so, and Samsung officials say they hope to have their oven in stores next year.

By then, the unit may even be capable of keeping an inventory of groceries and notifying users when it's time to restock, he said. Eventually, it could be connected to a touch-screen computer that allows access to the entire Internet including everything from nutrition about the meal being cooked to weather and news reports said Yam.