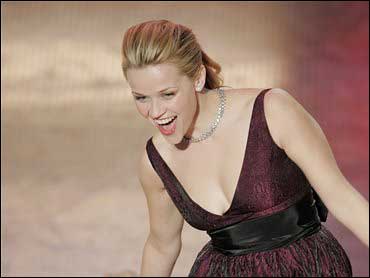 The stars came dressed to thrill Tuesday night at the 32nd Annual People's Choice Awards. The red carpet was full of fashion hits and misses and even a few cases of "what were they thinking?"

Stylist-to-the-stars David Evangelista and Katrina Szish, style editor of Us Weekly, tells The Early Show's Julie Chen which stars made the grade and which ones fell a little flat.

Both Evangelista and Szish loved the way Reese Witherspoon looked.

"Everything Reese does is flawless," Szish said. "The perfect ponytail — it wasn't too much. It was youthful, but it was simple and elegant. I think the dress was flattering on her. I loved the sash. I loved the fact it was a tea-length dress instead of full length. Less is more with Reese. She didn't go dripping in diamonds, and I think she made the perfect style statement."

Evangelista agreed, saying, "When I critique, I look at everything from head to toe. From the hair to the makeup to the dress. I think she looked amazing."

"I thought she looked great," said Evangelista. "It was tea length and she looked great in lace. The hair was half up, half down. It wasn't too much. Just enough diamonds. I thought it was very, very elegant."

"I thought that was absolutely fabulous. It was sexy, sort of tousled — very Sandy Bullock," she said. "But I think the dress was a little too girlie for her. She has great attitude, such a sense of humor and I felt the lace was almost a little bit not her style. It looked great on her, but I don't know if it would have been my choice."

Watch behind-the-scenes interviews with the winners

Of the "Everybody Loves Raymond" star's red Escada gown, Evangelista says, "I thought it was pretty. It wasn't a 'wow' factor for me. This is like 'Let the fashion gates open.' This starts at award season. You come out strong. It was a great color. She wears clothes really well."

"It was an Escada dress. It was great," said Szish. "The trend of the evening was not full-length dresses. It was really about wearing something just below the knee. The color was gorgeous, as David mentioned. It wasn't what I had hoped."

"She's a beautiful woman. I think she needs to go for it a little more. She blends into any — she doesn't pop out of her dress color wise," said Evangelista. "It's a great cut. Again, there's a trend. It's tea length. You saw it at the Critics' Choice. It's a trend."

Szish says Sheridan's white tea-length dress was neither a hit nor a miss.

"I think thumbs in the middle, if that counts," she said. "Like David said, she sort of blends. You want to see her do more. What I liked is she didn't have a big necklace on. She was a little more elegant than she tends to be. The little stub of a ponytail wasn't my favorite."

Evangelista liked the black dress worn by the star of the CBS crime drama CSI.

"It's fun. It's a party dress. She looks great in it. She's got a great figure and knows how to work it," he said.

"Normally, I wouldn't like the spider-webby cutouts on the side," said Szish. "On her, it looks great. It was appropriate for the event and gets thumbs up."

Elfman, the star of the new CBS comedy, Courting Alex, got a thumbs up from both critics.

"I didn't even recognize her. I thought she looked stunning," said Evangelista. "Her hair looked sexy, her body looked amazing and the dress was perfect. It didn't detract from the face."

"We haven't seen her in a while. She looks different. She still looks amazing and knows how to carry herself," she said.

"I think Jessica was my biggest disappointment," Szish said. "She always looks gorgeous, of course. This wasn't as elegant as I wanted to see her look. The lacing detail around the top of that strapless dress — I thought it was a little too girlie. It reminded me of a costume she wore in the opening number of the show. It wasn't so good."

Neither critic was crazy about the full-length gold gown sported by the actress and model.

"I do agree," said Evangelista. "It was a little too heavy on her bosom."