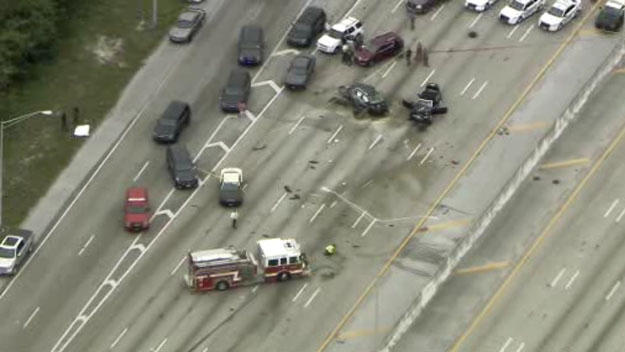 LANTANA, Fla. -- Drivers described "mayhem" as a murder suspect drove the wrong way on a major Florida interstate Wednesday, causing multiple crashes before he was shot and killed by sheriff's deputies.

Police say Hugo Steven Selva, 22, shot 26-year-old Nicole M. Novak in the parking lot of a Lake Worth shopping center around 9:30 a.m. Wednesday and took her in his car, fleeing the scene. CBS affiliate WPEC reports Novak was shot in the head.

Selva was shot and killed in the car by a deputy who was responding to the scene of the third crash along with the Florida Highway Patrol. Bradshaw said the suspect's movements in the vehicle made the deputy fear for his life, but Bradshaw didn't detail what the man was doing. The deputy wasn't injured.

Bradshaw said a trooper had tried to deploy a Taser before the suspect was shot, but it didn't work.

The drivers of the vehicles involved in the three accidents were injured, but none of the injuries were life-threatening, Bradshaw said.

Mike Mancuso of Lake Worth told the station he was driving northbound on I-95 around 9:45 a.m. when he saw a car approaching going about 100 miles an hour on the shoulder of the road.

"I said this guy's going to kill me or kill somebody," Mancuso said.

Moments later, the suspect struck three cars and finally came to a stop when his SUV caught on fire.

Mancuso said he called 911 three times. He told the station he felt lucky to have escaped uninjured and that "somebody was watching over" him.

Another witness, Attila Fajta, sent WPEC cellphone video of the scene moments after the final crash, just before the interstate was shut down.

The video shows smoke, car parts all over the road, the suspect's SUV on fire, as well as Palm Beach County Sheriff's deputies and Florida Highway Patrol troopers surrounding the vehicle.

Dawn and Tom Saylor told WPEC they were driving to St. Mary's Medical Center to visit their ill son when they saw the murder suspect's SUV.

"I remember him with a beard, and he was just driving stiff, like he was on, just a mission," Dawn Saylor said.

Her husband Tom was driving.

"All of a sudden the cars were coming right at us, so I veered off, and he veered off, and in the mirror, I can see him hit head-on, and it was just mayhem after that," Tom Saylor said.

The suspect crashed 50 feet away from them. Dawn Taylor said it reminded her of a scene from a movie.

"Behind us, all you can see were debris and cars, smoke, fire. We were like, 'Oh my God, what just happened?'" she said.

Both told the station they felt lucky to be alive.

"It appears that through hard work and diligence here, and a timely response by the FHP and our deputy, we have averted this guy not only crashing into a whole bunch more cars on this side of the road, but escaping here and going on to do whatever he's going to do, which is obviously involved in shooting people, because he did one last night and obviously the one here today," Bradshaw said.

WPEC reports police have linked Selva to a shooting Tuesday night in West Palm Beach that left a victim injured, as well as a shooting early Wednesday in Boynton Beach in which a 21-year-old man was injured.

Interstate 95 was closed in both directions for six hours as investigators processed the massive scene.

Authorities have not detailed a motive.