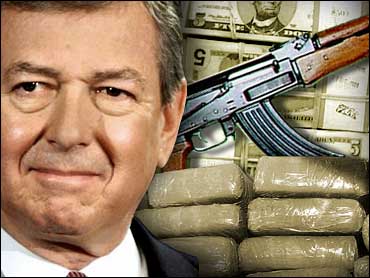 U.S. agents arrested four people in a drugs-for-weapons investigation, charging them with plotting to deliver $25 million worth of weapons to a Colombian terrorist group, Attorney General John Ashcroft said Wednesday.

Undercover agents secretly videotaped meetings in London, the Virgin Islands and Panama City at which the defendants allegedly discussed exchanging drugs for weapons that would be sent to the Colombian United Self Defense Forces, known as the AUC.

The four were charged with conspiracy to distribute cocaine and conspiracy to provide material support and resources to a foreign terrorist organization, charges that could carry up to life in prison, Ashcroft said.

"The war on terrorism has been joined with the war on illegal drug use," Ashcroft said.

He added that, because of the investigation by the FBI and Drug Enforcement Agency, "narco-terrorists from South America to Southeast Asia are less able to threaten American lives and American security."

In a separate case that Ashcroft described Wednesday, three men are fighting extradition from Hong Kong to face charges stemming from an alleged scheme to use profits from illicit drug sales to finance the purchase of Stinger missiles for the al-Qaeda terror network.

The three men - two Pakistanis and one U.S. citizen originally from India - allegedly sought to sell a half-ton of heroin and five tons of hashish in the San Diego area and use the money to buy four Stinger missiles, authorities say.

The three suspects in custody in Hong Kong were identified as Syed Mustajab Shah and Muhammed Abid Afridi, both of Pakistan, and naturalized U.S. citizen Ilyas Ali.

The Stinger is a shoulder-fired, American-made weapon effective in attacking low-flying aircraft.

There appeared initially to be no evidence that the men had any connection to the 19 hijackers involved in the Sept. 11, 2001, terror attacks. Three of the Sept. 11 hijackers lived or visited the San Diego area.

During a recent visit to Asia, Ashcroft praised Hong Kong for helping cut off terrorist financing and met with local officials about finding new ways to cooperate in the anti-terror war.