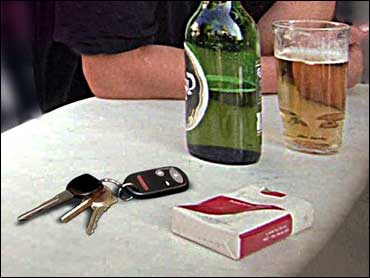 The number of drunken driving deaths in the United States rose last year after holding steady during most of the 1990s, Mothers Against Drunk Driving said Thursday.

MADD graded the nation with a C — down from a C-plus in 1999 — with California ranking the highest with a B-plus, and Montana flunking.

The reason for the increase, reports CBS News Correspondent Sandra Hughes, may not be more drunk drivers, but rather a lack of resources to deal with them.

"We've got about 300 people getting killed every single week in this country in completely preventable crashes," Hamilton said.

The grades are based on the number of alcohol-related crashes in each state, trends in the number of deaths, state laws on the books and enforcement efforts.

After California, other states that got high marks include Georgia, New York, North Carolina and Oregon, which all received B grades.

Montana was the only state to flunk. Hamilton said it was the first time a state received an F since the group began rankings a decade ago.

She called Montana "abysmal," noting the number of alcohol-related crashes in the state, its failure to set 0.08 percent as the legal blood-alcohol limit and a lack of support for making failure to wear a seat belt a primary traffic violation.

Dave Galt, director of the Montana Department of Transportation, said he is concerned about that number but said the state is working to lower it.

Galt said he expects the Legislature will consider lowering the blood-alcohol level from 0.1 percent next year and imposing a statewide ban on open containers of alcohol in vehicles.

Galt said he disagreed with how the report described the state's efforts to fight drunken driving, pointing to state funding of efforts to reduce underage drinking and to set up visible sobriety checkpoints.

MADD's recommendations to reduce the number of deaths include more and well-publicized sobriety checkpoints. It also urged tougher penalties against drivers who refuse alcohol tests when stopped, are caught driving with license that was suspended for an earlier drunken driving arrest or who have a blood-alcohol level of 0.15 percent or more.

One group, the Governors Highway Safety Association, criticized the MADD report, saying states should be judged on how they measure up against their own goals rather than against each other.