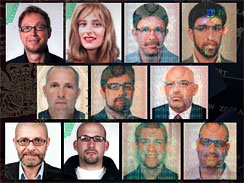 The killing of a Hamas operative in a Dubai hotel may signal the end of an era: the moment when modern technology finally caught up with the cloak-and-dagger world of disguised assassins and fake passports.

"The last assassination of its kind," said a headline in the Israeli daily Haaretz.

Some believe the fallout — the killers whose faces and aliases were made startlingly public, their movements gone from state secrets to YouTube favorites — could mean a permanent change in the murky world of espionage.

The hit team got into the Persian Gulf city undetected, pulled off the highly complex killing of Mahmoud al-Mabhouh, and escaped unscathed: mission accomplished, or so they must have thought.

But then the photos on their doctored passports were released by Dubai police and published worldwide. So were their 26 aliases, more than half of which turned out to belong to real-life dual nationals living in Israel, whose Mossad agency is widely assumed to have been behind the killing.

Israel saw several of its important friends, including Britain, Ireland and Australia, express displeasure with the killing and the abuse of their passports.

Terry Pattar, a security consultant for IHS Jane's in London, said the details that became public "might represent an unexpected operational risk that had not been planned for."

In the future, he told The Associated Press, "They will have to decide if the probability of high levels of media coverage after the event is an unacceptable risk that outweighs the potential benefit from a successful assassination."

The spread of technology of the kind that uncovered the Dubai operation has permanently altered the rules, wrote Yossi Melman, Haaretz's intelligence correspondent. "The conclusion could be that the era of heroic operations in the style of James Bond movies is close to its end."

Inspired by Dubai's success, neighboring Abu Dhabi announced Wednesday that it would spend more than $120 million to blanket the city with surveillance cameras.

Today, said Gad Shimron, a field operative for the Mossad in the 1970s and 1980s, agents risk leaving electronic footprints everywhere: credit card charges, passport information in airport computers and easily traced cell phone calls. As Dubai demonstrated, they must also plan for the possibility that law enforcement will be able to put the pieces together.

And if the current complications seem daunting, Shimron said in an interview, agents will soon face even greater challenges with the advent of biometric passports, which can feature fingerprint, facial and iris recognition, making them far harder to forge.

But if the spy's world has become more complicated in some ways, it has become simpler in others, Shimron said. A few decades ago carrying communications equipment would have been a sure giveaway; today cell phones and tiny computers arouse little suspicion.

The Dubai operation shows not that 21st century spies have been vanquished by technology, he said, but that they have accepted the ways it restricts them while taking advantage of the ways it can help.

Jonna Mendez, who spent some of her 27 years in the CIA as the agency's chief of disguise, believes the Dubai perpetrators took the fallout into account, all of it: the TV footage, the blown aliases and the head shots. The agents, she said, clearly knew they were under surveillance — they had simply decided it was unavoidable and a price worth paying.

"You can be sure they knew they were being surveilled. Likewise, they would assume that the documents they were using would be made available after the fact," said Mendez. "What does this mean? It means it didn't matter. The faces and the documents that were captured by the cameras will probably never be seen again."

The fact that the perpetrators had to take the identities of real people rather than simply invent false identities is a symptom of the new world facing modern-day spies, one of databases and traceable passport information, she said.

The real agents likely don't resemble the faces in the photos, she said: "Bald? Not really. No facial hair? Not normally. Blonde? Are you kidding," Mendez said. And if they do, plastic surgery, dental implants and hair grafts can ensure they are unrecognizable afterward.

"Steal the identity, disguise the participants, be ready on the other side with another set of identities and documents, and embrace and conceal the protagonists on their return," she said. "With that goal in mind this may, in fact, be the operation of the future."