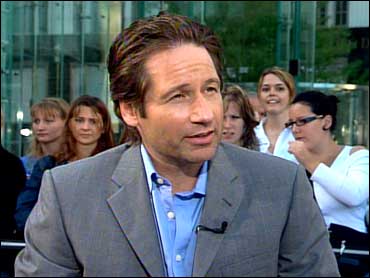 David Duchovny's new movie "Trust the Man" is a romantic comedy that could be very familiar to a lot of us. Duchovny plays a stay at home dad married to Julianne Moore, and neither one knows what the other one really wants.

Duchovny's character ends up having an affair with one of the mothers at his children's school.

"I really thought that the issues were relevant, you know, about fidelity and about making relationships work," he told The Early Show co-anchor Harry Smith. "And the comedic approach to it was also wonderful in that this guy that I play has this affair, immediately decides he must be a sex addict and goes into 12-step meetings."

Duchovny's character attends a self-help meeting in a church basement where he realizes that other people have much more serious problems than he dies. In one of the movie's funny scenes, the character makes up more complicated sexual problems to compete with the others.

The movie is about the struggle of two couples living in New York. The other two are played by Maggie Gyllenhaal and Billy Cruddup.

"I think the movie hearkens back to old Woody Allen-type movies," Duchovny said. "For me, it was a combination of a classic romantic comedy and a harder edge of more modern-day film making. Finally, you know, in the third week of release, we've come up with a tag line. Probably a month too late, but we're calling it a chick flick with balls now."

Besides the comedic plot, Duchovny said he was attracted to the movie because of his friendship with Julianne Moore's husband, Bart Freundlich, who wrote and directed the film. Duchovny also worked with Moore in the film "Evolution." He said that when a friend sends him a script, he feels somewhat obligated to do the film.

"You hope that it's good because you're probably going to have to do anyway," he said. "But in this case … I was hoping it was good, and it was great. There was never any hesitation from me.

"When you have material like Bart writes, which is very kind of smart and subtle and verbal, it's really a pleasure to just do it as written."

Duchovny said that in some instances his close relationship with Freundlich and Moore made things a little more complicated than usual.

"You could call it an added twist or something uncomfortable," he said. "A couple of scenes where we're making out, and Bart is as close to us as you are to me right now. You can just hear him muttering under his breath, wanting to cut early and things like that."

Another reason the film resonated with the former "X Files" star was that it was show in New York City's village neighborhood, where Duchovny grew up.

"It's fantastic," he said. "I would see people would walk by. We actually shot a scene that's not in the movie in a doctor's office, and it turned out to be the office of a kid that I went to eighth grade with. So people walked by, and I hadn't seen them for 30 years. 'Look, I'm just doing a take right now. We'll talk when this is over.' "

Coming up, Duchovny stars in a movie he made with Halle Berry called "Things We Lost in the Fire" and he hasn't ruled out another "X Files" movie.