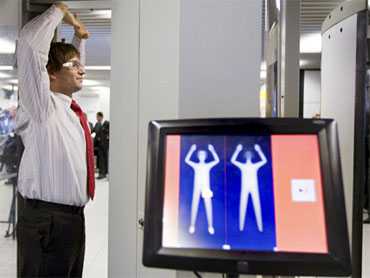 Security has been tightened at Amsterdam's Schiphol Airport after a team of investigative journalists smuggled bottles of liquid onto passenger jets bound for London and Washington, D.C., the airport and the Dutch anti-terror agency said Tuesday.

Security at Schiphol has been under scrutiny since Nigerian Umar Farouk Abdulmutallab flew from the airport to Detroit on Christmas Day with explosives in his underwear. Abdulmutallab allegedly tried to detonate the explosives before being grabbed by passengers and crew.

In an undercover operation broadcast Sunday night that led to Tuesday's security boost, reporters refilled bottles bought at a duty free store, resealed them and smuggled them back into the store where they had bought them.

They then went through the check-out counter again with the same bottles, where they were put into sealed plastic bags that were not checked by security staff.

The National Anti-terror Coordinator says extra security staff will immediately begin patrolling duty-free stores at the airport and there will be more stringent checks on bottles bought there. Some stores will stop selling liquids altogether.

The stunt was possible because handbag security is conducted at the boarding gate rather than before entering the departure lounge where the duty-free shops are located.

Liquids have been considered a potential security threat since the so-called shoe bomber, Richard Reid, tried to detonate liquid explosives hidden in his shoe in 2001.

Abdulmutallab has been indicted in the U.S. on six charges, including the attempted use of a weapon of mass destruction aboard Northwest Airlines Flight 253. He faces up to life in prison.

The reporter who led the undercover sting, Alberto Stegeman, is well known for exposing security flaws at Schiphol. In the past he has posed as an airport maintenance worker. He also smuggled a fake bomb into a royal palace in downtown The Hague.

Schiphol spokeswoman Mirjam Snoerwang said Schiphol is the only major European airport that has security checks at the boarding gate for intercontinental flights and trips to Britain, Ireland and countries that are not part of the so-called Schengen zone of 25 EU countries as well as Iceland, Norway and Switzerland.

Snoerwang said the airport was aware of the possible weak link in its security before it was exposed on national television.

"We considered it - together with our minister of justice - an acceptable level of risk," she said. But after the television show, "automatically the risk is not acceptable any more so that is why we have taken some extra measures."

Stegeman said he was surprised Schiphol knew about the risk and had not acted earlier.

"If I can think of this, then so can anybody," he said in a telephone interview. "It is easy to think up and easier to carry out."