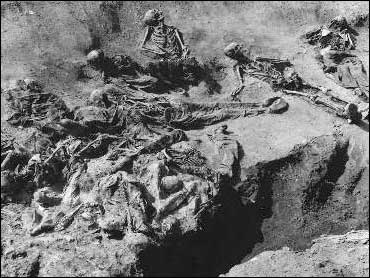 The Dutch prime minister Friday denounced as "irresponsible" a claim by a retired U.S. general that gay Dutch soldiers were partly to blame for allowing Europe's worst massacre since World War II.

Dutch officials, from the Cabinet to the military, were outraged by retired Gen. John Sheehan's remarks at a Senate Armed Services Committee hearing in Washington, D.C., on Thursday.

Sheehan claimed that Dutch military leaders had called the presence of gay soldiers in the army "part of the problem" that allowed Serb forces to overrun the Srebrenica enclave in Bosnia in July 1995 and kill some 8,000 Muslim men.

Dutch troops were serving in the undermanned U.N. peacekeeping force in Srebrenica when they were overrun by heavily armed Serb forces, who went on to turn the surrounding countryside into killing fields littered with mass graves.

Prime Minister Jan Peter Balkenende called Sheehan's comments irresponsible and said at his weekly news conference that "these remarks should never have been made."

"Toward Dutch troops - homosexual or heterosexual - it is way off the mark to talk like that about people and the work they do under very difficult circumstances," he said.

Sheehan, a former NATO commander who retired from the military 1997, was speaking in opposition to a proposal to allow gays to serve openly in the U.S. military.

Balkenende said he would not take up the issue with President Barack Obama because Sheehan is already retired.

Defense Minister Eimert van Middelkoop called Sheehan's claim "damaging" and not worthy of a soldier. "I don't want to waste any more words on it," he said.

Gen. Henk van den Breemen, Dutch chief of staff at the time of the Srebrenica genocide, called Sheehan's comments "total nonsense" and denied ever having suggested gays in the army might have played a role in the Srebrenica massacre.

The Netherlands has a long history of accepting homosexuality, and gays have long been welcome in the country's armed forces - which also allow labor unions.

The leader of one such union, Jan Kleian, was incensed by Sheehan's comments.

"The man is crazy," he told Dutch radio. "It sounds hard, but I can't put it any other way."