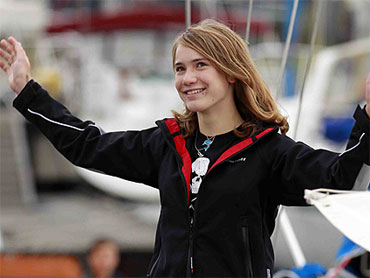 A 14-year-old Dutch sailor departed in secrecy from Portugal Saturday on her quest to become the youngest person to sail solo around the world, avoiding the media because her manager said she didn't want the attention.

Laura Dekker said goodbye to her father and friends at an undisclosed Portuguese port enroute to Spain's Canary Islands or Portugal's Madeira Island despite almost windless conditions in the Atlantic Ocean off the coast of Portugal, according to manager Peter Klarenbeek.

Klarenbeek said the girl was in good spirits as she started sailing her 38-foot (11.5-meter) ship "Guppy" on a trip expected to last a year or more. The attempt has been criticized by Dutch child protection authorities who questioned the wisdom of a child risking the world's oceans alone.

"She said goodbye to her father and friends and she sailed away into the horizon," Holland's MasMedia company, which has exclusive TV rights to film her voyage, said in a statement.

Laura had been scheduled to depart from Portimao, and photographers and television crews from around the world were at the resort in southwestern Portugal but ended up with no images of the departure. MasMedia is documenting the trip with remote cameras mounted on Laura's yacht and offered to sell the footage to anyone who is interested starting on Sunday.

The girl's website features links titled "My Coordinates" and "Where is Laura," but neither was working Saturday, and a porthole-shaped counter of the days of her voyage stood at zero.

One of the voyage's sponsors, Ferry Dammers, showed up in Portimao with a banner to display on her boat as it left - but he ended up hanging around with the media crowd and never got to mount his banner on the "Guppy."

"I am disappointed, I have the banner here but when I spoke to Klarenbeek he informed me Laura had already set off on her journey," said Dammers, whose company supplied Laura with wax for the hull of her sailboat.

A Dutch court last month released Laura from the guardianship of Dutch child protection agencies who had tried to block her voyage because of fears about her safety and psychological health.

Marijke Schaaphok, Masmedia's director, defended the girl's push to sail around the world, saying Laura is mature for her age and has proven that she can sail her yacht without help from anyone else after passing a maritime exam in the Netherlands for a vessel of her boat's size.

She also insisted that Laura is uniquely qualified for the ambitious sea venture because she grew up with her father on a boat, and "is completely different from a normal 14-year-old girl." Schaaphok said.

"She's very wise and a little bit impatient, but she's a very nice girl and she knows exactly what she wants," Schaaphok said.

Laura's first port of call will be picked based on wind conditions, and her departure came after she took numerous steps to reduce objections to the voyage - including the purchase of a bigger, sturdier boat than the one she originally planned to use, and courses in first aid and coping with sleep deprivation.

She also used as evidence her successful solo trip across the North Sea to England.

In the end, the Dutch court ruled that her preparations were adequate and it was up to her divorced parents to decide whether to let her make the attempt.

The trip comes just two months after American Abby Sunderland, age 16, had to be rescued in a remote section of the Indian Ocean during an attempt to circle the globe. Earlier this year, Australian Jessica Watson, completed a 210-day voyage at age 16.

But while Watson remained at sea nonstop, Laura plans to stop at dozens of ports and may even return home to catch up on her studies before resuming her trip.

If Laura completes the voyage, any record she claims would be unofficial and likely to be challenged. The Guinness' World Records and the World Sailing Speed Record Council have decided they will no longer recognize records for "youngest" sailors to avoid encouraging dangerous attempts.