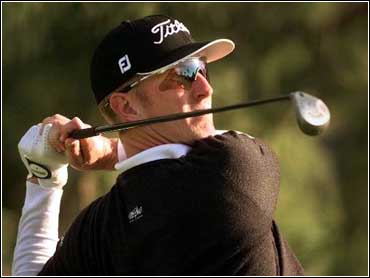 A frustrating year got even worse for David Duval on Tuesday when he was forced to withdraw from the PGA Championship because of back problems that have plagued him for two months.

Duval, the No. 3 player in the world rankings, briefly challenged Tiger Woods in the final round of the British Open despite a lower back sprain. He tried to play The International two weeks ago, but withdrew during the first round with hopes of playing in the PGA.

He never left his home in Sun Valley, Idaho.

"It stinks," he told The Associated Press. "My mind is saying, 'Let's go play. Let's get after it. You're fit, you can work through this.' But as much as I think this way, I know deep down the right thing to do is not play."

He was replaced in the field by Craig Stadler.

Duval was still No. 1 in the world ranking a year ago this week, until Woods won the PGA at Medinah and began a streak of 11 victories over his next 20 tour events, including three of the last four majors.

Duval, meanwhile, has not won since the week before the 1999 Masters. His best chance came at Augusta National this year, when he trailed champion Vijay Singh by one stroke in the final round until hitting into the water on the par-5 13th.

He first experienced back pain after the U.S. Open, and it continued to bother him at St. Andrews. Still, he cut Woods' six-stroke lead in half over the first seven holes, but Woods restored order with a birdie to start the back nine and Duval found trouble in the bunkers.

"It's ironic that I finally got my golf game where I wanted it, I had my body where I wanted, and all of a sudden something gets in the way," he said. "That's just the hand I've been dealt and you have to move forward."

Duval took up a strict fitness and diet regimen at the end of last year, sculpting his body with hopes he could sustain his play the entire year. Instead, he is having to skip a major for the first time since the 1995 Masters, for which he was not eligible.

"I thought about coming, more than anything just teeing off," he said. "In the long term, that would have been a poor decision. With the adrenaline and a strong desire, I might have kept going and possibly set myself further back and ended my year."

He said he has not hit a golf ball since walking off the course in The International on the sixth hole of the first round, and has been doing exercises in Sun Valley to strengthen his muscles. He described the injury as a "ligament issue" in his lower to middle back.

Duval said he would enter the NEC Invitational next week at Fireston, but is not sure whether he would play or how soon he could return.

The next tournament he had planned to play is the Buick Challenge in Georgia the last week of September.