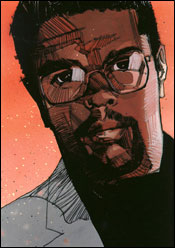 (CBS/AP) Dwayne McDuffie, who wrote scores of comic books for Marvel and DC and founded his own publishing company before crossing over to television and animation, has died.

(Scroll down to read a CBSNews.com interview with McDuffie from 2006)

McDuffie was co-founder and editor-in-chief of Milestone Media, which was formed in 1993. While working at Milestone Media, he co-created many characters, including Static, which was also made into a popular animated TV series called "Static Shock."

McDuffie wrote comics for the New York-based DC and Marvel, including runs on "Batman: Legends of the Dark Knight," the Fantastic Four and the Justice League of America. He also penned several animated features, including the just-released "All Star Superman," "Justice League: Crisis on Two Earths" and animated TV series "Static Shock" and "Ben 10: Alien Force."

DC Comics says the Detroit, Mich.-native died Tuesday. His age and place of death were not immediately known.

CBSNews.com's Chad Chamberlain interviewed McDuffie in 2006. That interview is re-printed below.

CBSNews.com: Is this your first time designing a storyline for a videogame?

Dwayne McDuffie: I wrote a "Static Shock" Gameboy Advance a few years ago, but this is by far the biggest, most complex videogame I've ever written.

What are the differences between game design (story wise) and writing comics?

In comics, I only have to completely work through one possible plot. In a videogame, I have to work through scenarios with many possible variations, depending on the characters you choose and the decisions you make.

Is there any character that you really wanted to write into the game but you couldn't?

Who is your favorite character in the video game that most accurately portrays your character development for both the comic book and the animated version?

I think all of the characters who appear in both the comics and the TV show are pretty close to each other, except for Flash and Green Lantern, who lean just a hair more towards their cartoon versions. But the game characters are based on the comics, for the most part, and they're as accurate to the comics as we could make them.

Is the story for "Justice League Heroes" set in the current DC comics universe or the DC animated series universe, or is it self-contained?

Self-contained, but it could be in the comic's continuity.

Static appeared in quite a few episodes of "JL." Any chance of seeing him in "JLH"?

Wait, can I change my answer to question No. 3?

What system(s) are you most playing now?

I'm a notably terrible videogame player. I left my hand-eye coordination in my other pants.

What do you think "next gen" systems can do for games like "JLH"?

I'm not the best person to ask. I'm constantly impressed by how much better each iteration of gaming technology is than the previous. I wouldn't be surprised if the next version of a game like "JLH" will be an even closer approximation of a comic book you can play than this one. But for the moment, "JLH" is state-of-the-art superhero fun.

There's a game called "Hero Clix," (I'm sure you've heard of it) where you can pit Marvel-DC-Indy characters against one another. Do you think there will ever be a "Static Shock" fig and, more importantly, do you think we'll ever see a "Hero Clix" video game for home consoles?

"Hero Clix" has never expressed any interest in "Static Shock" or the other Milestone characters, so probably not, although it would be fun. "Hero Clix" for home consoles sounds like it would be fun, but a licensing nightmare.

Are you working on the new animated "Justice League" movie?

I didn't know there was a "Justice League" animated movie, so no.

Will you be on the "Justice Unlimited" season one DVD coming out next month?

Sorry, yes. It's a great set otherwise though, containing the first 26 episodes of "JLU," including all of the Cadmus arc and "Epilogue."

Will we see Static (or any of the Milestone crew) again anytime soon either in print or on the screen?

I hope so. I'm always trying to find a way to get them back out there.

"Beyond" is shaping up to be a great series. Do you have anymore comic-related things coming out soon?

Glad you asked! I'm writing a three-issue arc in DC Comics' "Firestorm." (Hey! Maybe he should have been in the game, too!) And I'm the new writer on Marvel Comics' "Fantastic Four."

Did you know all along that "Damage Control" had something to do with Marvel's civil war?

I didn't have a clue. Pretty cool though, huh?

Do you have any idea when we'll start to see more of your Milestone characters like Static, Blood Syndicate or, my personal favorite, Icon?

Nope. Working on it, though.