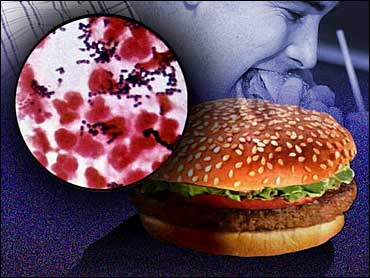 Ground beef may to blame for an E. coli outbreak that has sickened at least 32 people in Ohio and Michigan.

E. coli bacteria can cause diarrhea, which may be bloody, as well as stomach cramps and vomiting. Most people recover within five to seven days, but some cases may be severe or life-threatening; infants, elders, and people with weak immune systems are particularly at risk.

The Michigan and Ohio E. coli cases, which began in late May and early June, are linked, based on interviews with patients and lab tests, according to the CDC.

Ground beef is emerging as a leading suspect in many of the cases.

Michigan's health officials say that more than half of the Michigan patients said they had bought and ate ground beef from Kroger Food Stores, but that doesn't mean that beef sold at Kroger was definitely to blame. Kroger is cooperating with Michigan health officials. A Kroger spokesperson wasn't immediately available for comment.

In Ohio, a beef sample from one of the patients tested positive for E. coli. That beef was bought at a Kroger store in Ohio, according to Ohio's health department. A second beef sample, bought by a consumer at another Ohio Kroger store, showed no signs of E. coli.